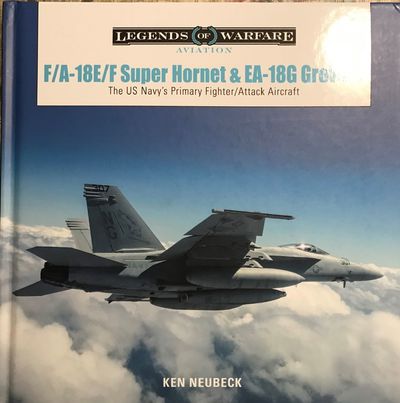 by NEUBECK, Ken
Atglen, PA: Schiffer Military, 2020. First Edition. Signed by Neubeck on the title page. Signed copies of this title are uncommon. Ken Neubeck is a reliability engineer who worked on the A-10 production program. He is the author of several aircraft books and has taken many photographs of the Thunderbirds team during performances on Long Island. He served as president of the Long Island Republic Airport Historical Society, which preserves the history of Long Island aviation. The Boeing F/A-18 E/F Super Hornet is an evolutionary redesign of the McDonnell Douglas F/A-18 A/B Hornet. The Legacy F/A-18 Hornet first flew in 1980 and met the requirement for a multirole fighter to complement the larger and more expensive Grumman F-14 Tomcat, serving in fleet defense interceptor and air superiority roles. The Hornet proved to be effective, but it was limited in combat radius due to fuel capacity. This would be corrected with the newer and larger F/A-18 Super Hornet design, which is now the primary fighter/attack aircraft used in the US Navy carrier fleet and has replaced both the legacy Hornet and the F-14 Tomcat. Additionally, the Super Hornet airframe design was used for the design of the EA-18G Growler, which took over the electronic countermeasures (ECM) role of the EA-6B Prowler. Small oblong quarto: pictorial boards, issued without a dust jacket; 112 pages. Profusely Illustrated.. Near fine (covers very nice, very tiny bump one corner; contents clean & tight). (Inventory #: 57333)
$75.00 add to cart or Buy Direct from Antic Hay Books
Share this item
Antic Hay Books
Offered by