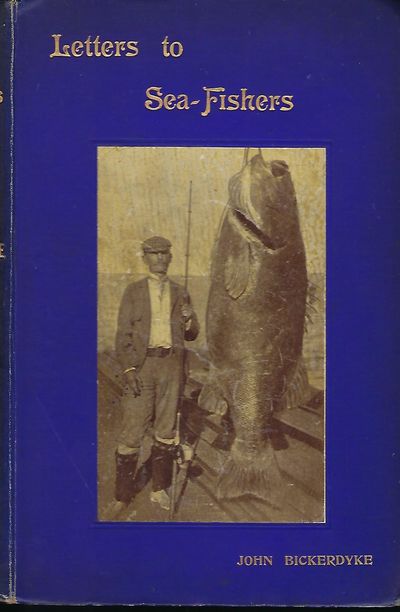 by BICKERDYKE, John. [Charles Henry COOK]
London: Horace Cox, 1902. Second Edition [Revised Edition]. Signed presentation from Bickerdyke [Cook] on the verso of the front endpaper, to his son: "To Barry Cook, from his loving father the Author. Aug. 27, 1902." John Bickerdyke [real name is Charles Henry Cook: 1858-1933] was considered much like today's angler Jeremy Wade, star of the "River Monsters" television series. Bickerdyke was far from gullible and more often intent to disprove rather than corroborate unusual fishing tales, but his angling travels provided a wealth of extraordinary tales. He searched hard for a giant Irish pike and, though a true monster eluded him, he found enough fish and rumors to fill many books. This title is a comprehensive book on sea angling from boat and shore, covering all of the usual disciplines, plus chapters on ocean fishing, modern improvements in fishing tackle, flyfishing in the sea, and similar topics. Bickerdyke' signature is uncommon and this is a wonderful association copy!. 8vo., blue cloth with large pictorial fishing plate on front cover, stamped in gilt; 342 pages plus extensive catalogue at rear. Illustrated.. Very Good (covers bright; contents clean & tight). (Inventory #: 57336)
$350.00 add to cart or Buy Direct from Antic Hay Books
Share this item
Antic Hay Books
Offered by