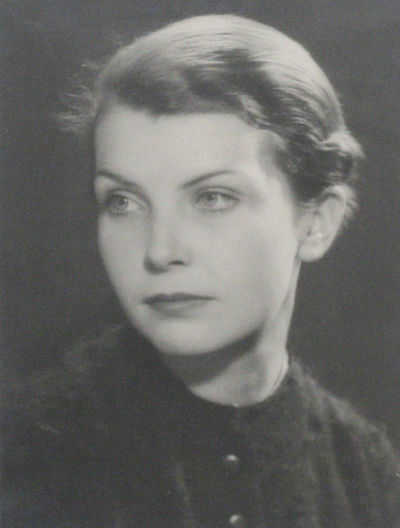 by RAY, MAN [MAN RAY]
Paris: Man Ray, 1931. First edition. gelatin silver print. Fine. STUNNING PORTRAIT PHOTOGRAPH BY MAN RAY OF MARY GILL; WITH ICONIC ARTIST STUDIO STAMPS ON VERSO INDICATING A CONTEMPORARY PRINTING. "The man who was to become the most important photographer of the 20th Century and one of the leading experimental painters of the modern era was born Emmanuel Radnitsky in Philadelphia in 1890, the son of a Jewish immigrant tailor." Having been introduced to Alfred Stieglitz during the early 1900s in his Manhattan 291 gallery, Man Ray made a name for himself in Paris primarily as a photographer, capturing fashion models and famous subjects like Pablo Picasso, Gertrude Stein, and Jean Cocteau.  (Michael Kilian, "Man Ray - The Legend Lives", The Chicago Tribune, Dec. 11, 1988).

In this exquisite photograph, Man Ray captures Mary Gill (sometimes known as "Mary Gill-Einstein" since she was the first wife of the American painter William Einstein, or "Marie Gill" from her time in Paris), looking away to her right. Not many images of Gill appear to have survived: we have located one from the same sitting with Gill staring straight into the camera, as well as several solarized prints from approximately the same time.

The soft, slightly blurred tones of this image add an air of mystery to the photograph. The masterful composition, with Gill looking off to one side, complements this mystery with Gill inviting the viewer to follow her gaze and wonder at the source of the thoughts that could produce such an enigmatic (and perhaps melancholic) expression.

"Man Ray's real home was Montparnasse. About June of 1922, he moved from the Hotel des Écoles, on rue Delambre, to the studio at 31 bis, rue Campagne Première. Here he flourished. Berenice Abbott, Kiki, Lee Miller, and Marcel Duchamp each worked here. The Art Deco building served as his studio for nearly thirteen years" (Manford).

This print bears on the verso two of Man Ray's stamps with the rue Campagne Première address, identified as two of the stamps he used at this address (see Steven Manford, Behind the Photo, where the stamps are labeled "M5" and "M6" by Manford). The print can therefore be dated as between c.1931 (when the image was taken), and 1935, when Man Ray changed his address and stamp.