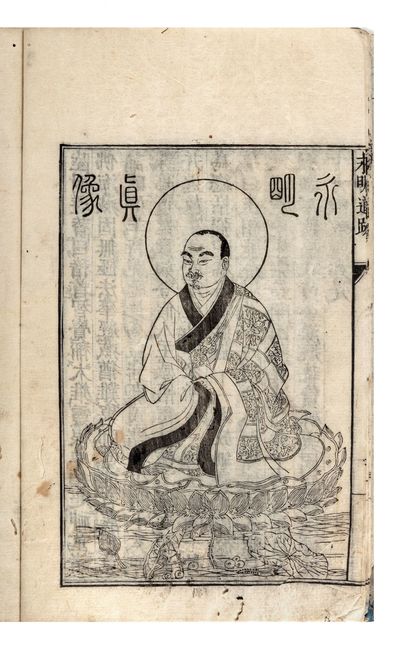 by DAHE (J.: DAIEI or DAIKAKU)
32 fine full-page woodcuts. 42 folding leaves. Large 8vo, orig. blue wrappers (wrappers rather rubbed, minor soiling), modern manuscript label on upper cover, new stitching. [Japan]: from the Japanese colophon on the penultimate leaf: "Nakano Zesui had the woodblocks carved & published this book mid-July 1655." First edition to be published in Japan, printed in Chinese with Japanese reading marks. Yongming Yanshou (J.: Eimei (or Yomei) Enju, 904-75), was a Chan master who had a profound impact on the development of Buddhism in East Asia. Yanshou was a widely influential proponent of a scripture-based Chan, in opposition to the rhetorical and iconoclastic Chan of the Linji school. He became the first master to teach both Meditation and Pure Land Buddhism, a synthesis that dominated Chinese Buddhism after the Song dynasty. This finely illustrated biography of Yanshou was written by the late Ming monk Dahe. It contains the later notes contributed by Yu Chunxi (jinshi 1583) and Huang Ruheng (1558-1626). Yu Chunxi was a good friend of Zhuhong (1535-1615), and active in the late Ming Buddhist revival. Huang Ruheng, who moved in the same intellectual circles, was a noted calligrapher. This rare work is well illustrated with a series of 32 full-page woodcuts, starting with a "true image" of Yanshou. The remainder of the woodcuts show the major religious events in his life, from his youth to old age. We learn from the final leaf that our edition was copied from the Chinese edition of 1606. Some worming throughout. The woodcuts are largely free of worming at the beginning, but the final eight leaves are more affected. â§ In WorldCat, the authorship of the copy at Harvard (accession no. 43420760) is given as Daiei. (Inventory #: 7511)
$4,750.00 add to cart or Buy Direct from
Jonathan A. Hill, Bookseller
Share this item
Jonathan A. Hill, Bookseller, Inc.
Offered by