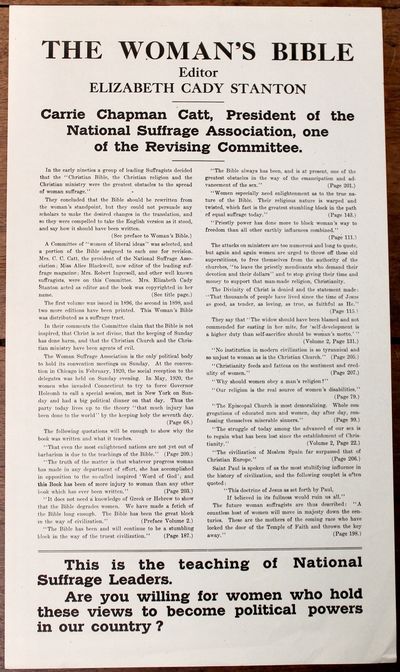 first edition Sheet of buff paper printed on one side only. Very minor creasing.

by [ Anti-Woman;s Suffrage].
[ n.p.] n.d., ca. 1920.] First edition. Probably issued shortly before the ratification of the Nineteenth Amendment in August of 1920. The latest event mentioned in the broadside occurred in May 1920, when "the women who invaded Connecticut to try to force Governor Holcomb to call a special session, met in New York on Sunday and had a big political dinner on that day. Thus the party today lives up to the theory 'that much injury has been done to the world' by keeping holy the seventh day." . Sheet of buff paper printed on one side only. Very minor creasing. . Broadside (9 " x 16 "). Title and footer text printed in large, bold type. With two-column text attacking Stanton, Catt (who was not, in fact, associated with the Woman's Bible), Alice Blackwell, Henrietta Ingersoll, and other suffragists and reprinting supposedly objectionable passages from the Woman's Bible. Footer text reads: "This is the teaching of National Suffrage Leaders. Are you willing for women who hold these views to become political powers in our country?" A near-fine copy of a scarce item criticizing the Woman's Bible and the supposed anti-Christian beliefs of suffragists. From the Library of Congress: "In 1895, Elizabeth Cady Stanton published the first edition of the Woman's Bible, an attempt to amplify, explain, and redefine scriptural references pertaining to women in the basis that these were often used as a rationale to deny women particular rights and privileges. The work was undertaken by a committee and involved searching the both Old and New Testaments for references to women, cutting them out, and then pasting them on blank pages in a book. Then commentaries were added beneath the quotations." The Woman's Bible was reprinted in 1898 with an additional pamphlet by Stanton titled "Bible and Church Degrade Women." (Inventory #: 16932)
$1,500.00 add to cart or Buy Direct from
Michael R. Thompson Rare Books
Share this item
Michael R. Thompson Rare Books
Offered by

CWO Visa, MC , American Express, Discover SHipping: $12.00 1st ordinary-sized book within the U.S., at cost for others. Our normal method of shipping within the U.S. is U.P.S. International orders shipped at cost; please inquire about costs of air and surface shipment. All books guaranteed as described. Items returnable within ten days if the customer is dissatisfied; please phone or e-mail first. Customers are encouraged to e-mail us with any questions before ordering.
More from this seller

Whitman: The Poet-Liberator of Women.

New York : Published by the Author, , 1905
(click for more details about Whitman: The Poet-Liberator of Women.)
View all from this seller>