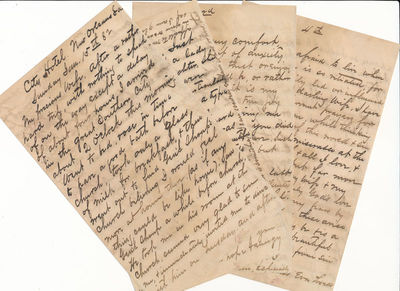 signed
by McBEE, Silas (1853-1924)
Notable Episcopalian journalist, editor, educator and church architecture consultant; he edited the influential "The Churchman" (1896-1912) and founded and edited "The Constructive Quarterly" (1913-23), served as principal of the all-girl Fairmount School, and having studied cathedral architecture in Europe he designed and supervised church construction in Houston, Nashville, Louisiana and both Carolinas and also designed Walsh Memorial Hall at the University of the South; he was closely involved in construction of a cathedral in Manila with Ralph Adams Cram and also in the Cathedral of Saint John (New York) and the National Cathedral (Washington, DC). Fine content ALS, 8pp (4 leaves), 5" X 8", New Orleans, LA,15 January 1882. Addressed to "My precious Wife" [first wife Mary Estelle Sutton, 1854-91]. Very good. Moderately age toned throughout. Writing home after an extended trip away that included Atlanta for unknown reasons, quite a bit of this lengthy missive is a love letter to his wife, whose beauty and religious devotion he praises at length: "...a vision of my holy little wife in her simple black, came over me & my heart seemed more than I could control & the tears welled up so that a few needs must flow. 'You will never Know' how lovely & beautiful you are to me & how the thought of you inspires me with fresh hope & energy...." There is grieving mixed in with it, for the couple had lost a child (Silas Jr.): "you seem to me holy & I feel sure you were made to be holy & will most surely be holy in the hereafter, where our little angel is awaiting to 'come again to greet us, as we are drawing near.... it may be tis a blessing to have our beautiful child in heaven, away from sin & its consequences." He seeks out former Confederate brigadier general Francis Asbury Shoup (1834-96), now an Episcopalian rector: "...went out to find Gen'l. Shoup's church believing I would feel more at home there... Saw Gen'l. Shoup a while before church. He took me in his room at the church, seemed very glad to see me, & immediately invited me to dine with him on Tuesday, and afterwards gave me an additional invitation to lunch with the ministers of the city.... I then went into the church & was given a seat next to Mrs. Shoup...." There are some observations about New Orleans and its residents: "Just before me in church sat a lady with her husband & daughter. She was very handsome, all were dressed richly, but she particularly so, & very tastefully. Just a type of the beautiful New Orleans dressing of which I have heard you speak so frequently." Or: "I like much that I have seen, especially the streets. I have seen enough however to confirm all that you have said, of the beauty & luxury of the place & people...." He criticizes how the Sabbath is kept, though: "The way the Lord's day is kept, or rather not kept is distressing. My heart went out to many of the people I saw selling & buying to-day (for the stores, many of them are open, & the streets have a business appearance) because I could not blame them near so much as the corrupt state of public opinion that permits such defiance of Gods law. Many of these people I am sure, are not willfully breaking God's law, but simply allowing themselves to follow the way of the day of the world." It is possible that McBee, who served on the board of trustees for the University of the South at this time, was recruiting students for the school, for he mentions "I hope I shall be able to accomplish something here as to securing students I am anxious to see some fruit from my work...." A superb letter with meaty content on several topics. With original envelope, addressed by McBee (to which he pencils much later, "May be read by any one"). (Inventory #: 46800)
$295.00 add to cart or Buy Direct from
Main Street Fine Books & Mss.
Share this item

New York : Harcourt, Brace & Company , 1936
(click for more details about The People, Yes)
View all from this seller>