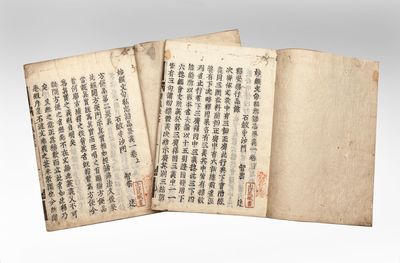 by CHIH YUN
Ten columns per page, 18 characters per column. 49; 55 folding leaves. Two vols. 8vo (280 x 198 mm.), orig. brown wrappers (upper cover of Vol. I somewhat soiled, wrappers of Vol. II a little wormed), new stitching. [Japan, perhaps on Mount Hiei: ca. 1600-40]. An extremely rare movable type edition; not in Kawase or Sorimachi. WorldCat locates only a copy, at Kyoto University. Our copy comes from the famous collection of Toshie Obama with his seal at the foot of the first leaf of Vol. I. Chih yun was a disciple of Tiantai Zhiyi (538-97), one of the most influential monks in Chinese Buddhist history and the founder of the Tiantai zong. Zhiyi had studied the Lotus Sutra and in 587 wrote an authoritative commentary on it entitled Fahua Wenju, considered to be one of Zhiyi's three greatest commentaries. The commentary was put into writing by a disciple named Guanding (561-632), in 10 or 20 rolls. Chih yun, about whom little is known, based his own commentaries on Zhiyi's writings. We know that Chin yun was a resident of Shigu Temple in Dalian. From the final page of Vol. II we learn that in 913 the Japanese Buddhist priest Kakuman, living in the Enryakuji monastery in the Senkoin building, carefully copied the text from a Chinese manuscript. This book could well be an "Eizan-ban," printed at the Enryakuji monastery complex on Mount Hiei, which specialized in Chinese works as well as Tendai scriptures. A rather nice copy, preserved in a chitsu. Some worming, both marginal and textual, but never obscuring the characters. â§ Buswell & Lopez, The Princeton Dictionary of Buddhism, pp. 290 & 911-12. (Inventory #: 7551)
$10,000.00 add to cart or Buy Direct from
Jonathan A. Hill, Bookseller
Share this item
Jonathan A. Hill, Bookseller, Inc.
Offered by