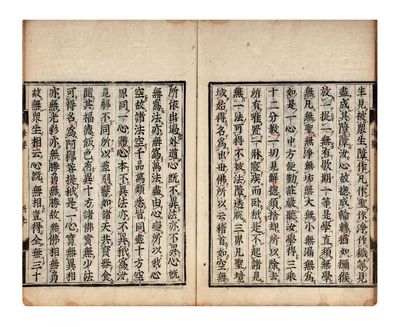 by PEI, Xiu, compiler & editor
40 folding leaves. Large 8vo (275 x 180 mm.), orig. wrappers stained dark brown with fermented persimmon juice to prevent worming, new stitching. From the final leaf: "Nijo tamaya cho Murakami Heirakuji" [this is a town within Kyoto known as Nijo tamaya cho; the publisher was Kanbee Murakami, and his shop's name was Heirakuji], "1632" & "1634" [the final leaf gives these two dates based on the zodiac]. Second edition to be published in Japan, printed in Chinese with Japanese reading marks. This is a very rare book, and we find no copy in WorldCat. Kawase records an extremely rare gozan ban edition printed in 1283 at one of the five temples at Kamakura. These lectures, delivered at the monasteries of Longxingsi and Kaiyuansi by the Chan master Huangbo Xiyun (d. 850), were recorded by Pei Xiu (787?-860), the powerful Tang dynasty minister of state. Pei, a devout Buddhist, was a prominent lay disciple of Huangbo. Pei provided a preface to the lectures, dated 857, and "edited his notes together as the Chuanxin fayao and Wanling Lu [both contained in the present book]. The two texts seem to have circulated together until the eleventh century. The central tenet of the Chuanxin fayo is the teaching of the 'one mind'. Since everything, including Buddhas and sentient beings, are all considered to be aspects of the one mind."-Buswell & Lopez, The Princeton Dictionary of Buddhism, p. 191. "The firm of Murakami Kanbee, which also went under the name of Heirakuji, is not only one of the earliest Kyoto commercial publishers that can be identified, but it is also one of the few publishing enterprises of the Tokugawa period that is still in business...The firm was founded in the early years of the seventeenth century and, according to its records, initially printed sinology, Buddhist books and works of Japanese history with movable type."-Kornicki, The Book in Japan, p. 208 & see pp. 208-10 for more on this publishing company. Fine copy. Minor soiling and thumbing. (Inventory #: 7552)
$5,500.00 add to cart or Buy Direct from
Jonathan A. Hill, Bookseller
Share this item
Jonathan A. Hill, Bookseller, Inc.
Offered by