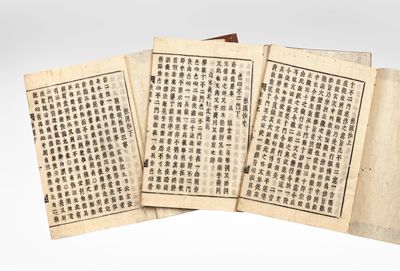 by ZHANRAN (or JINGXI ZHANRAN)
13 columns per page, 18 characters per column. 43; 49; 55 folding leaves. Three vols. 8vo (279 x 195 mm.), orig. wrappers stained dark brown with fermented persimmon juice to prevent worming (nevertheless wrappers a little wormed, with careful repairs), cont. manuscript title labels, with "Kongen" written on each cover, new stitching. [Japan]: ca. 1630-40. A rare movable type edition, unrecorded by Kawase or WorldCat. Sorimachi, in his wonderful Catalogue 42 (1972) of movable type books, describes a copy (item 419) and gives a date of "mid-Kan'ei" (ca. 1630-40). In his description, Sorimachi states that the full title of this work is Jippunimon Kongensho or Jufunimon Kongensho. He also suggests that it might well be an "Eizan-ban," printed at the Enryakuji monastery complex on Mount Hiei, which specialized in Chinese works as well as Tendai scriptures. This work contains the text in Vols. II and III of The Essentials of the Ten Gates of Non-Duality [Ch.: Shibu'er men], by Jingxi Zhanran (711-82), the putative ninth patriarch of the Tiantai zong and one of the great revitalizers of the Tiantai tradition. Interspersed with Zhanran's text is later commentary by other Tiantai monk-scholars. Vol. I contains further commentaries, including those of Siming Zhili (960-1028), a Chinese monk of the Tiantai tradition. "In 991, [Zhili] became the abbot of Ganfusi, and four years later he began his residence at the monastery Bao'enyuan on Mt. Siming, whence his toponym...Zhili later found himself at the center of the Shanjia Shanwai or 'Home-Mountain/Off-Mountain' debate that racked the Song-dynasty Tiantai school."-Buswell & Lopez, The Princeton Dictionary of Buddhism, p. 825. Zhili's commentary, written in 1004, was important. "From the Song forward, orthodox Tiantai doctrine has been based upon Zhili's doctrinal elaborations on Tiantai teachings. Zhili was best known for his interpretation of the thought of Zhanran...who commanded great respect and imperial patronage in the Tang Dynasty... "Zhili's doctorial elaboration on Zhanran's teachings was generated during debates with other Tiantai monk-scholars over Zhanran's works. The victorious faction, led by Zhili, was retrospectively known as the Home Mountain (shanjia) Teaching in contrast to their opponents, labeled the Off Mountain (shanwai) Teaching. In [the present work], Zhili criticized his opponents' interpolation of Huayan and Chan thought in Tiantai doctrine... "Zhili's interpretation was canonized, other interpretations were left in oblivion. Tiantai orthodoxy for the following centuries was defined during the Song Dynasty."-Shin-yi Chao, "Chinese Religion in the Song and Alien Dynasties," in Nadeau, ed., The Wiley-Blackwell Companion to Chinese Religions, pp. 106-07. A very good set, preserved in a chitsu. With some carefully repaired worming throughout, touching characters. In Vol. III, the final 18 leaves have worming that obscures several characters per leaf. (Inventory #: 7554)
$12,500.00 add to cart or Buy Direct from
Jonathan A. Hill, Bookseller
Share this item
Jonathan A. Hill, Bookseller, Inc.
Offered by