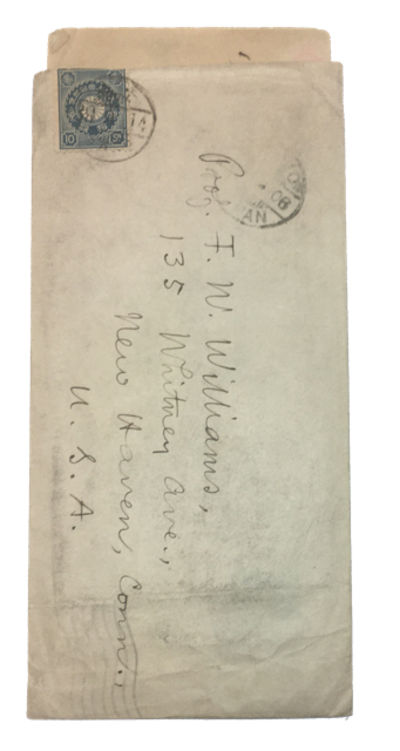 by Asakawa, K[an'ichi]
Fair. Single sheet (53 x 20 cm), written in a clear hand on one side and folded into 7 narrow sections for mailing. Stamp with postmark on end section and on separate envelope. Split at fold between what we are calling sections five and six. Asakawa, who earned his Ph.D. in history from Yale in 1902, writes to Williams updating Williams on the studies that Asakawa planned to carry out in the summer of 1906 at Kyoto, Nara and Ise. He concludes his letter with some complaints about Yale: "I am, however, rather exasperated over the uncertainty of success of raising funds at Yale Library. There are a hundred & one grand opportunities which I have been obliged to let pass because of uncertainty. It would be absolutely ridiculous to return to Yale with such miserable materials to work with as we have there." Asakawa apparently changed his mind because he returned to Yale a year later (1907), initially as an Instructor, and remained there until 1942. In addition to teaching and research, he served for many years as Curator of Yale's East Asia Collection and did much to improve Yale's "miserable materials." He was named a full professor in 1937. (Inventory #: 91523)
$200.00 add to cart or Buy Direct from McBlain Books
Share this item