SUGAR IN RELATION TO THE TARIFF 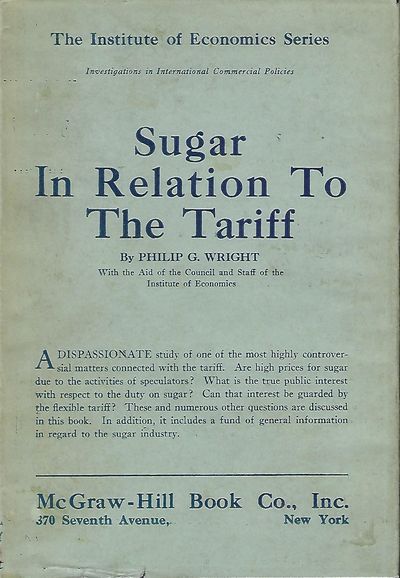 by WRIGHT, Philip G.
NY: McGraw-Hill Book Company, 1924. First Edition (so stated on title page). Signed by former U.S. Secretary of State Louis A. Johnson on the front endpaper. Philip Green Wright [1861-1934] was an American economist who first proposed the use of instrumental variables estimation as the earliest known solution to the identification problem in econometrics. He also wrote poetry, was a mentor to the poet and author Carl Sandburg, and published some of Sandburg's earliest works. In 1917 he accepted a position in Washington with the newly-formed U.S. Tariff Commission. His three sons are geneticist Sewall Wright, political scientist Quincy Wright, and aeronautical engineer Theodore Paul Wright. Louis Arthur Johnson [1891-1966] was an American politician and attorney who served as the second United States Secretary of Defense from 1949 to 1950. He was the Assistant Secretary of War from 1937 to 1940 and the 15th national commander of The American Legion, from 1932 to 1933. An interesting copy and hard to find a signed copy or a copy in the original dust jacket. 12mo., blue ribbed cloth, spine stamped in gilt, in the original dust jacket; 312 pages. The Institute Of Economics Series.. Near fine (covers nice & bright; contents clean & tight); bit of rubbing and minor edgewear d/j.
A nice copy in the scarce dust jacket. (Inventory #: 57355)
$85.00 add to cart or Buy Direct from Antic Hay Books
Share this item
Antic Hay Books
Offered by