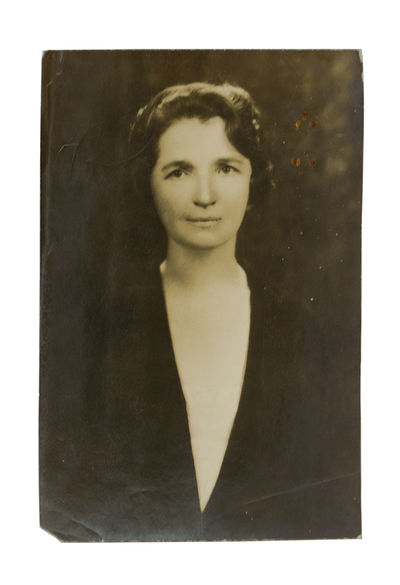 by SANGER, Margaret
A Signed Photograph Of Sangerís Portrait Displayed at the National Portrait Gallery [SANGER, Margaret]. Signed black-and-white photograph of Margaret Sanger by Ira L. Hill, [n.d.c.a. 1917-1930]. Gelatin silver print. (5 3/8 x 3 1/2 inches; 131 x 89 mm). Signed in pencil on the verso of the photograph in pencil and dated ìAug 18/31î. Some minor rubbing along edges. Bottom left corner with a tiny chip. A few light scratches and creases. Some tiny rust spots. But still image is clean and clear. Pencil signature on the verso, along with previous ownerís old ink notes. Overall a very nice copy of an important image. This is the same image of Sanger that is the one featured at the National Portrait Gallery, photographed by famed American photographer, Ira L. Hill. The National Portrait gallery states this about the photo: ìThis photograph was taken shortly after Sanger's thirty-day imprisonment in 1917 for opening her first birth control clinic. Shortly before her release, the police ordered her to submit to fingerprinting. When she refused, a prolonged physical struggle ensued, from which she emerged the winner.î This photo at the NPG was a gift of Margaret Sanger Lampe and Nancy Sanger Pallesen, granddaughters of Margaret Sanger. The date of this photo is in question, as there is another image from the same sitting which is part of the Los Angeles Public Library Photo Collection which states for itís description ìStudio portrait of Mrs. Margaret Sanger, Chairman of the National Committee on Federal Legislation for Birth Control. Mrs. Sanger will be one of the principal speakers at the Western States Conference on Birth Control and Population Problems to be held at the Biltmore Hotel. She is making her headquarters at the Biltmore Hotel. Photo dated: February 19, 1930.î This seems perhaps more accurate, as our photo is dated 1931. We could not find any other samples of this photograph at auction. [Together with]: [SANGER, Margaret]. Margaret Sanger. An Autobiography. New York: W.W. Norton & Company, [1938]. First edition. Octavo (9 3/8 x 6 3/8 inches; 237 x 161 mm). [1]-504, [2] pp. With photographic frontispiece portrait. Title-page printed in black and blue. Original full blue cloth. Spine printed in orange and gilt, and lettered in gilt. Top edge brick red, others uncut. Some minor rubbing to boards. Overall about fine. Margaret Sanger is a womanís rightís activist and a pioneer of the birth control movement, starting clinics that would eventually become known as Planned Parenthood. ìSanger made it her mission to 1) provide women with birth control information and 2) repeal the federal Comstock Law, which prohibited the distribution of obscene materials through the mails, and regarded birth control information as such. In 1914, Sanger launched her own feminist publication, The Woman Rebel, advocating for birth control. She was charged with violating the Comstock laws and fled to England, though had friends share a pamphlet she authored on contraceptive techniques in her absence. She returned a year later to stand trial, but when her five- year-old daughter died unexpectedly, public pressure led to the charges against Sanger being dropped. In 1916, she opened the first birth control clinic in Brownsville, Brooklyn. Barely a week later, she was arrested and spent 30 days in jail. Sangerís arrest garnered much media attention and brought her several affluent supporters. She appealed her conviction, and although she lost, the courts ruled that physicians could prescribe contraceptives to women for medical reasons, a loophole that allowed Sanger to open a clinic in 1923 staffed by female doctors and social workers, which would later become the Planned Parenthood Federation of America.î (Womanshistory dot org). HBS 68449. $1,500 (Inventory #: 68449)
$1,500.00 add to cart Available from
Heritage Book Shop
Share this item