Book of the Thousand Nights and a Night [Benares Edition] 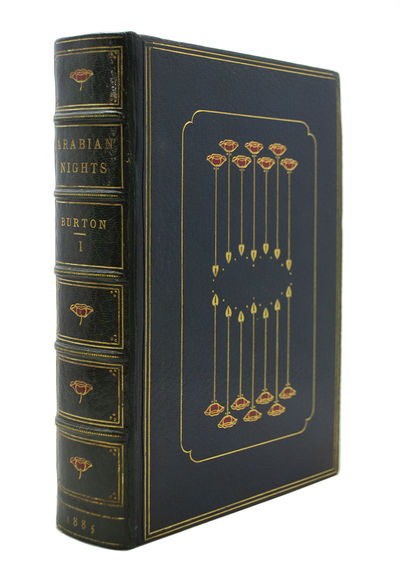 by ARABIAN NIGHTS
A Finely Bound and Extra-Illustrated Set of The Benares Edition of Burtonís Arabian Nights [ARABIAN NIGHTS]. BURTON, Sir Richard Francis, [translator]. A Plain and Literal Translation of the Arabian Nightís Entertainments, Now Entitled The Book of the Thousand Nights and a Night. With Introduction Explanatory Notes on the Manners and Customs of Moslem Men and a Terminal Essay Upon the History of The Nights by Richard F. Burton. Benares: Printed by the Kamashastra Society for Private Subscribers Only, 1885-1886. The original Benares Edition of Burtonís monumental translation. Sixteen large octavo volumes, including the supplemental volumes. This set has the beautiful suite of black and white plates by Albert Letchford bound throughout. Additionally, this set is extra-illustrated with the insertion of several full-page plates by other artists including S. L. Wood. Many plates are hand-colored. Beautifully bound by Macdonald in full blue levant morocco. Covers decoratively double-ruled and paneled in gilt, with red morocco floral onlays in gilt, spines decoratively tooled and lettered in gilt in compartments with similar red morocco floral onlays in gilt, five raised bands, gilt board edges and turn-ins, pastedowns paneled with red morocco and double-ruled in gilt, red silk doublures. Most volumes skilfully and invisibly rebacked, preserving the original spines. A fine set. Sir Richard Francis Burton (1821-1890) gained international fame and respect as an explorer and writer of travel books. However, it is his translation of The Arabian Nights that is best remembered today. HBS 68453. $12,500 (Inventory #: 68453)
$12,500.00 add to cart Available from
Heritage Book Shop
Share this item