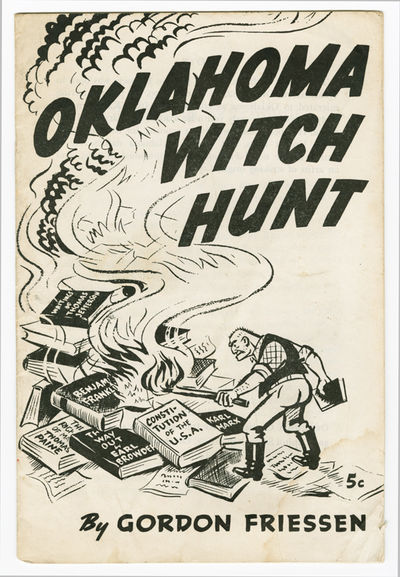 by Friesen, Gordon
Oklahoma City: Oklahoma Committee to Defend Political Prisoners, 1941. 23,[1]pp. Original pictorial self-wrappers, stapled. Slight wear. Old dampstain in lower outer corner throughout. Very good. A stinging attack on right-wing intimidation, violence, and political prosecutions in Oklahoma on the eve of American entry into World War II. Friesen describes prosecutions brought against Oklahomans because of the books they read, heightened Ku Klux Klan activities, the burning of books and attacks on bookstores, and more. Author Gordon Friesen's name is misspelled "Friessen" on the front wrapper, and in the short biographical note about him on the inner front wrapper. Friesen, a novelist and publisher, is best known for his influential folk music journal, BROADSIDE, published with his wife, Agnes Cunningham, and for his novel, FLAMETHROWERS, which was informed by his own Mennonite upbringing in Oklahoma. Uncommon in the trade. (Inventory #: WRCAM56413)
$300.00 add to cart or Buy Direct from
William Reese Co. - Americana
Share this item