Witches Liberation or, a True Witch Fights Back and Practical Guide to Joining a Coven 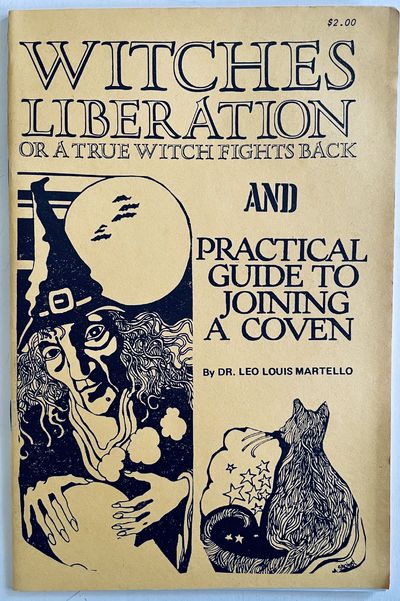 Martello was the first public witch to champion the establishment of legally incorporated tax-exempt Wiccan churches, civil rights for Witches, and like all mainstream religions, paid days off for witches on their holidays. To strengthen and further this cause, Leo founded the Witches' Liberation Movement and the Witches International Craft Association (WICA). "Pagan spirituality is a significant current that connects many of the activists from the 50s-70s.... studying the history of the persecution of witches is a way of building an intersectional view of past struggle that demands solidarity in the present."--Camp Books. This truly is the cornerstone of radical witchcraft publishing, documents social justice in queer communities, and presents the foundation of witchcraft uprising, as a religion, in America. This copy formerly owned by Dr. Leo Louis Martello.

Dr. Leo Louis Martello was an author, graphologist, hypnotist and Witch of note who came to prominence during the Pagan/Witchcraft Renaissance of the late 1960s and early 1970s.
As well as being very public regarding his Witchcraft, Leo was also very much out of the closet. He was a founding member of the Gay Liberation Front (GLF), acting as its first moderator. Leo would help GLF beyond being an officer, as he also created an editorial arm, being among the first to publish a newsletter by and for gay people called Come Out! He remained active in GLF until he had a falling out with other members over political opinions. He would move on to become a champion for the gay community within the modern Pagan world.--Witches' Almanac. (Inventory #: 10464)
$50.00 add to cart or Buy Direct from
Lux Mentis, Booksellers
Share this item
Lux Mentis, Booksellers
Offered by

What It Means to Be a Witch and Astro Witchcraft

New York : Hero Press , [1974]
(click for more details about What It Means to Be a Witch and Astro Witchcraft)

New York : House of Collectibles , 1972
(click for more details about Black Magic, Satanism, & Voodoo)
View all from this seller>