Crusoe's Island:; A Ramble in the Footsteps of Alexander Selkirk with Sketches of Adventure in California and Washoe 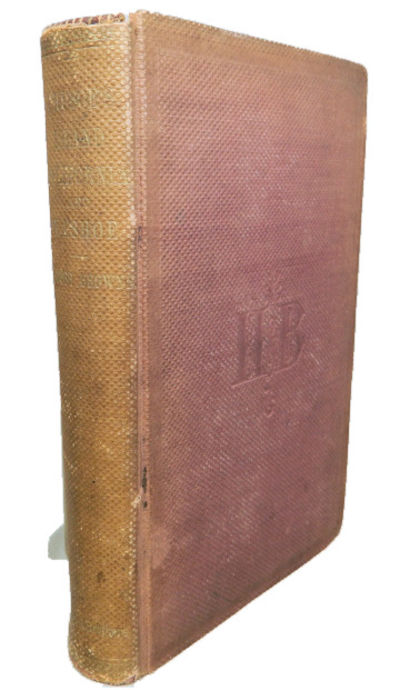 by Browne, J. Ross
New York: Harper & Brothers Publishers, 1864. First Edition. Very Good. [7.75x5.5in]; vii, 436 pp., 150 illustrations by the Author in text and full page; Publishers plum pebbled cloth covers with blind stamped border and design on covers, gilt lettering on spine; Shelf wear to covers, edges and corners with corners bumped and slightly frayed, some rubbing and soiling to edges and covers, spine faded and gilt lettering tarnished, top and bottom edges of spine frayed and missing small sections, some age toning to text and a random minor foxing spots, book plate of L. M. Wolcott on front end paper. [Wheat Books 24, Cowan64 p78, CowanII p26, Dillon (J. Ross Browne)]. John Ross Browne(1821-1875) was an Irish adventurer, writer, government agent that arrived in San Francisco in 1849 after a early years working on a riverboat and several whaling trips. During his 11 years in California to 1860, he became a noted "California Pioneer" and participated in the development of California literary society and as a State. Foremost he was a writer of articles and stories. This book contains four of Browne's stories - Crusoes' Island, A Dangerous Journey, Observations in Office, and A Peep at Washoe. Many were first published, in some form, in local newspapers and magazines, as well as in national magazines. There are several books about Browne's life and many fine press reprints of his popular stories that have been issued. Of this book, Cowan wrote "... the most entertaining books relating to early Californian life. (Inventory #: 13818)
$288.00 add to cart Available from
David Spilman Fine Books
Share this item