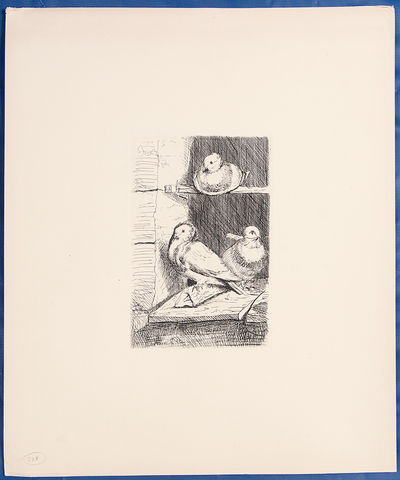 A talented amateur artist, Queen Victoria took up etching as a hobby, introducing the art to her husband shortly after their marriage in 1840. The royal couple etched frequently for about four years, the Queen being the more prolific, producing sixty-two plates as against the Prince's twenty-five. Both Sir George Hayter and Sir Edwin Landseer taught the royal couple. The plates were etched at Windsor Castle, sometime with both Victoria and Albert working together on the same plate, and it is believed some proof impressions were pulled from a small press there. Some of the plates (though largely the proofs) were bit and printed by the Queen's dresser Marianne Skerrett, though most were re-bit and printed by Colnaghi. However, very few of each of the etchings were printed, the pastime being largely for the royal couple's own amusement. "The etchings offer a picture of the interests of the royal couple in their early married years. The prince had a keen interest in art and the Old Masters; he introduced Queen Victoria to German romantic literature and Goethe and Schiller in particular. Prince Albert read to the Queen from Schiller's works. Their family absorbed them and the children and dogs play an important role in the etching subject-matter" (The British Museum).