ODE ON THE MEETING OF THE SOUTHERN CONGRESS 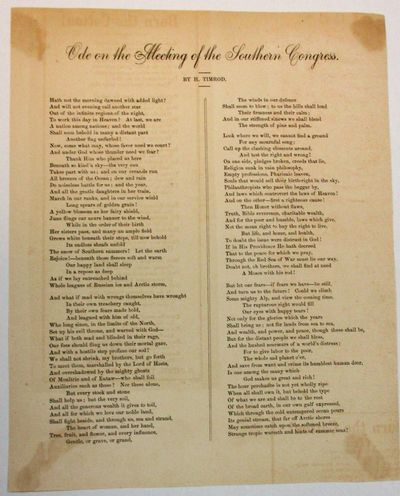 BAL's photograph depicts this broadside poem in poor condition, with much chipping, and thus does not do it justice. Timrod's poetic efforts lauding the southern Confederacy earned him the title, 'Poet Laureate of the South.' Here he waxes rhapsodic on the birth of the new nation. "...At last, we are / A nation among nations; and the world / Shall soon behold in many a distant part / Another flag unfurled!" The poem was reprinted throughout the War in southern newspapers, magazines, and anthologies. This, its first separate printing, is the paradigmatic example of Confederate romantic nationalism. The poem celebrates the convening of the Confederate Congress in Montgomery, Alabama, in early February 1861.
"In early 1861, Henry Timrod was a promising young poet and critic from South Carolina. He had just published his first collection of poems after gaining acclaim as a regular contributor to 'Russell's Magazine', the Charleston-based literary journal edited by Paul Hamilton Hayne. With the secession of the southern states, Timrod's romantic and formal poems would take on a decidedly Confederate nationalistic cast" [Hutchison, 'Apples and Ashes: Literature, Nationalism, and the Confederate States of America' page 4 et seq].
FIRST EDITION. BAL 20321. Parrish & Willingham 6577. Hummel 2468. Rudolph 189. OCLC 191233672 [8] [as of January 2021]. (Inventory #: 37365)
$3,500.00 add to cart or Buy Direct from
David M. Lesser, Fine Antiquarian
Share this item
David M. Lesser, Fine Antiquarian Books LLC
Offered by