Not So Bad As We Seem (Playbill) 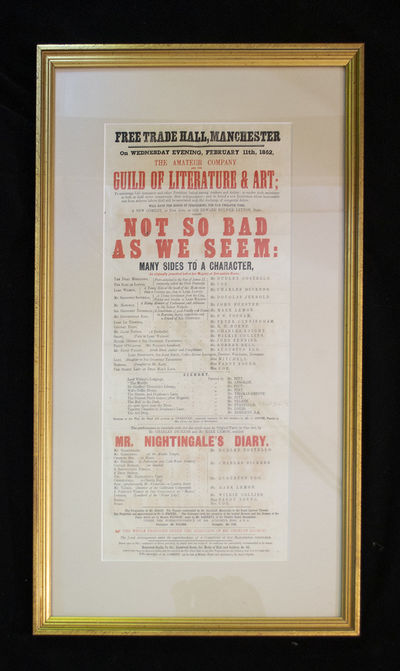 by DICKENS, Charles
Early Playbill Starring Charles Dickens [DICKENS, Charles]. "Not So Bad As We Seem" [Playbill]. Manchester: The Amateur Company of the Guild of Literature and Art, 1852. Matted framed and glazed. Playbill measures 19 x 8 3/4 inches and possibly larger under the mount. Frame measures 25 1/2 x 15 1/4 inches. Printed in black and red. With some minor creasing and a small pencil notation. Some very light offsetting and toning. Beautifully framed. Overall about fine. This playbill tells us that the Manchester staging of Not So Bad As We Seem is the twelfth performance of the charity production. Dickens, Douglas Jerrold, Wilkie Collins, John Tenniel, Mark Lemon, and others appear in the cast, with Dickens taking director and producer credit as well. "Free Trade Hall, Manchester. On Wednesday Evening, February 11th, 1852, The Amateur Company Guild of Literature & Art; To encourage Life Assurance and other Provident habits among Authors and Artists; to render such assistance to both as shall never compromise their independence.... Will have the honor of Performing, for the Twelth Time, A New Comedy, in five acts, by Sir Edwin Bulwer Lytton, Bart., Called Not So Bad As we Seem: Or Many Sides to A Character, (As originally presented before her Majesty at Devonshire House)..." "The Performance to Conclude with (for the ninth time) an Original Farce, in One Act, by Mr. Charles Dickens and Mr. Mark Lemon, entitled Mr. Nightengale's Diary... The Whole Produced under the Direction of Mr. Charles Dickens The Local Arrangements under the the superintendence of a committee of the Manchester Athenaeum..." HBS 68464. $3,500 (Inventory #: 68464)
$3,500.00 add to cart Available from
Heritage Book Shop
Share this item