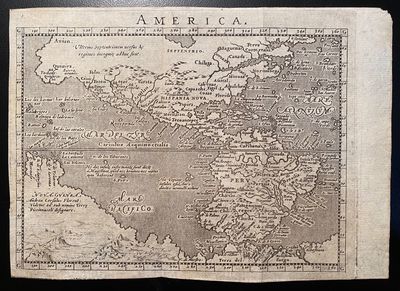 by [Magini, Giovanni Antonio]
[Cologne?], 1600. Very good. Copperplate engraved map (uncolored). 13.5 x 17.4 cm. (5 5/16 x 6 7/8 inches), trimmed around the platemark. Scale not stated. Stipple engraved seas. Unmatted, unframed. An attractive, early map of North and South America. THIS IS AN ORIGINAL ENGRAVED MAP, not a facsimile. JUSTLY FAMOUS MAP OF NORTH AND SOUTH AMERICA. The present map appeared without change in five editions of Ptolemy's "Geographiae universae" published between 1596 and 1621. The verso is blank, and there are two vertical folds suggesting that it was published in an octavo volume, possibly Matthias Quad's "Compendium universi complectens geographicarum enarrationum Libros sex" (Cologne: W. Lutzenkirch, 1600). The digitized National Library of the Czech Republic copy of 1600 "Compendium" shows that copies of the present map were bound between pp. 652-653 (available on Google books https://tinyurl.com/Magini-America-Map).

In the present map are depicted "Hispania Nova," "Fretum Magellanicu[m]" and there is a dotted sea between the words "Mare Pacifico." Geographically, the map derives from D'Anania's map of 1582 and Ortelius' map of 1579, retaining the bulge on the southwest coast of South America. The map depicts North and South America with the mythical great southern continent below. This quaint little map had a long life, appearing as late as 1713 in Raphael Savonarola's "Universus Terrarum Orbis Scriptorum."

Iter Italicum (COMPLETE SET of 6 vols. + Index volume). A Finding List of uncatalogued or incompletely catalogued Humanistic Manuscripts of the Renaissance in Italian and other libraries

London / Leiden : Warburg Institute / Brill , 1997
(click for more details about Iter Italicum (COMPLETE SET of 6 vols. + Index volume). A Finding List of uncatalogued or incompletely catalogued Humanistic Manuscripts of the Renaissance in Italian and other libraries)
View all from this seller>