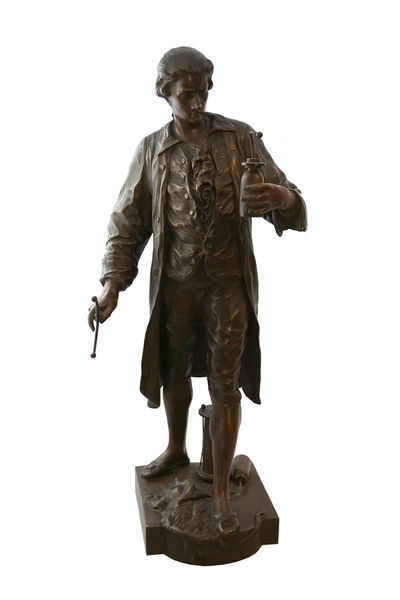 by PICAULT, …mile Louis
Bronze Sculpture, Signed "E. Picaultî PICAULT, …mile Louis, [artist]. L'ÈlectricitÈ.. Bronze sculpture, signed "E. Picaultî France: [N.d.c.a 1870]. A cast bronze sculpture. (21 3/4 x 9 inches; 552 x 228 mm ). Provenance: The Computer History Collection of Serge RoubÈ. Entitled "L'ÈlectricitÈ" on the bronze base, and signed "E. Picault.î A finely cast bronze sculpture that pays homage to the great 18th century figures in the study of electricity. It depicts a scientist with a Leyden jar in one hand, electrodes in the other. A voltaic pile and another Leyden jar rest on the ground behind him. Overall a very nice piece. Picault was a French sculptor, best known for works depicting allegorical and patriotic subjects, and mythological heroes... He began to show his artwork at the Salon beginning in 1863. He signed the majority of his work as "E. Picault". HBS 68468. $3,500 (Inventory #: 68468)
$3,500.00 add to cart Available from
Heritage Book Shop
Share this item