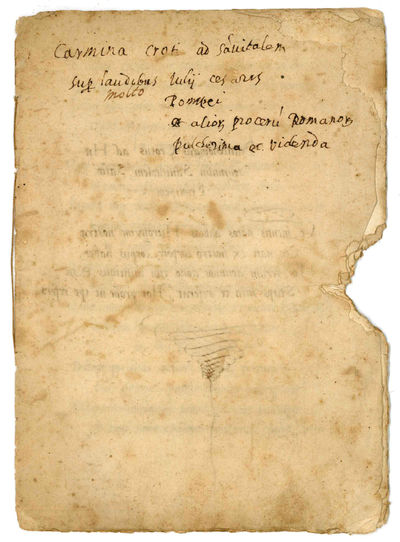 Unbound
by CROTTI, Bartolomeo (fl. 15th-16th cent.)
211x150 mm. 8 unnumbered leaves, of which the last is a blank. Sewn but unbound, preserved in a modern cloth slipcase. On the first leaf recto is the following title written by a later hand: "Carmina Croti ad Sanvitalem sup[er] laubibus Iulij Cesaris Pompei & alior[um] proceru[m] Romanor[um] pulcherrima ac videnda". The rest of the manuscript is written by a single, very elegant early 16th-century hand. On the first leaf verso is the dedication "Bartholmaeus Crotus ad Hieronymum Sanvitalem Salae Principem", followed by four verses and a calligraphic ornament. Watermark: lily with double trefoil and the letter 'M' below. Slightly uniformly browned (more strongly on the first and last leaf), paper loss of about 4x2 mm to the outer margin of all leaves not affecting the text, another loss to the outer upper corner of the first leaf not affecting the text.
This is an apparently unpublished and unknown collection of short epigrams dedicated to Girolamo I Sanvitale, Count of Sala, son of Niccolò Maria Quirico Sanvitale (d. 1511) and Beatrice da Correggio, married to Caterina Pallavicino and cousin of the famous condottiero Gian Galeazzo Sanvitale, portrayed by Parmigianino. Little is known about the life of Girolamo I Sanvitale; he was certainly still alive in 1545, because in that year he swore allegiance to the new Duke of Parma Pier Luigi Farnese, whereas previously he had been in the service of Charles V.
The collection contains short, often very short poems dedicated to famous figures of the ancient Roman world such as Caesar, Pompey, Cicero, Brutus, Cassius, Sulla, Mutius Scaevola, Furius Camillus, Scipio Africanus, Cornelius Scipio, Marcellus, Hortensius, Nero, Attilius Regulus, Cato of Utica, Catiline and others, as well as some carmina dedicated to contemporary figures such as the recently deceased Cesare Borgia (one of the poems dedicated to him is entitled "Eiusdem Tumulus" and concludes with the words "Caesar erat"), and Alfonso I d'Este (the first of those dedicated to him is entitled "Ad Alphonsum Ducem de Oppido Novo"). The last two compositions are entitled "De Mamma Sanvitale" and "Eiusdem Effigies" (always referring to Sanvitale).
Little is known about Bartolomeo Crotti's life. In 1500 he published in Reggio Emilia, his hometown, a collection of Latin elegies and epigrams entitled Epigrammatum elegiarumque libellus, which was printed together with Matteo Maria Boiardo's Carmen bucolicum. The year before, he had contributed to the 1499 Reggio Emilia edition of Boiardo's Sonetti e canzoni with a sonnet in Italian in praise of Boiardo and a Latin epigram. From a letter to Teofilo Zoboli we learn that, in addition to poetry, which he had learned in Reggio under Antonio Caraffa, Crotti had also studied music and had learned to play the organ under Giovanni Pietro Fabale and Giovanni Matteo Veneto. As a poet and a musician, he had gained the esteem, among others, of Celio Calcagnini and Gregorio Giraldi. Crotti served as canon and archpriest in his hometown. From the dedication to Lucrezia Borgia of his only other printed work, Opus Catonis inscriptum a Bartholomaeo Crotto in elegiacum versum. Eiusdem appendix [Ferrara, 1511], we know that he was in Ferrara in 1511. He travelled to Rome twice, in 1523 and 1534, perhaps in the hope of being appointed musician to the papal chapel (cf. G. Tiraboschi, Biblioteca modenese, Modena, 1782, II, pp. 197-202).With regard to the dating of the collection, considering that Cesare Borgia died in 1507, Girolamo I Sanvitale succeeded his father in 1511 and Alfonso I d'Este was duke from 1505 to 1534, it is conceivable that this anthology was composed between 1511 and 1534. The present manuscript was perhaps written by Crotti himself or copied for him by a professional scribe, who had an elegant hand but was not very familiar with Latin (this would explain the Latin errors present in the text). The manuscript can certainly be dated to the first half of the 16th century, even though we were not able to trace a similar watermark in any database. If we link these historical references to the scanty information we have on Crotti's life, we can presume that he dedicated this collection to Sanvitale at the end of his stay in Ferrara in 1511, although we do not know how long this lasted, in a period in which he could have been in search of a new destination and a new patron. (Inventory #: 85)
$5,800.00 add to cart Available from Govi
Share this item

Venice : Plinio Pietrasanta , 1554
(click for more details about Rime)
View all from this seller>