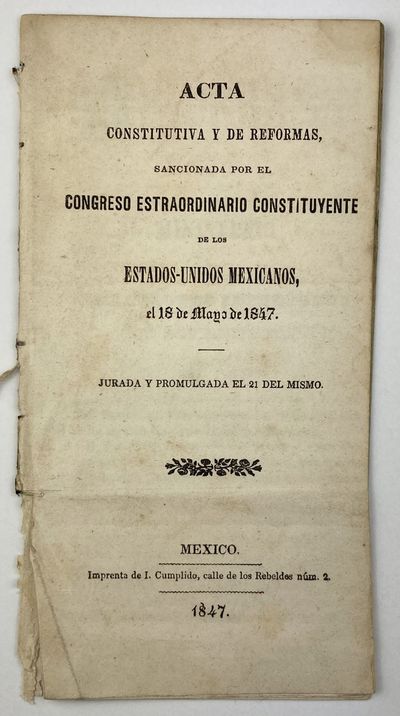 by [Mexico]
Mexico City: Imprenta de I. Cumplido, 1847. Good plus.. 12pp. 12mo. Dbd. Trimmed somewhat close at fore-edge. Closed tears from bottom edge of final three leaves near gutter margin. Light tanning. Amidst the Mexican-American War and rising unrest within the country, the Mexican government sought to pacify protests and create a sense of unity and strength amongst its citizens with the passage of this constitutional reform legislation. The present act in essence restored the federal Constitution of 1824, which had been supplanted in 1843 by the "Bases Orgánicas de la República Mexicana," a much more restrictive form of government that limited freedoms of speech and of the press, reinstated capital punishment, and established preferential protections for the Catholic Church. In addition, the act passed thirty articles of reform that affect matters regarding citizenship, voting, constitutionality of laws, and several other subjects. While the Constitution of 1824 proceeded in effect until 1857, its restoration did nothing to boost the morale of Mexico, and the war was lost for all intents and purposes when Mexico City fell to Winfield Scott's army several months later. Scarce. (Inventory #: 1803)
$1,375.00 add to cart Available from
McBride Rare Books
Share this item