Charles A. Lindbergh at the Dawn of His Career as a Professional Pilot The earliest known letter to have reached the market and it mentions his flying at Lambert Field, his first job 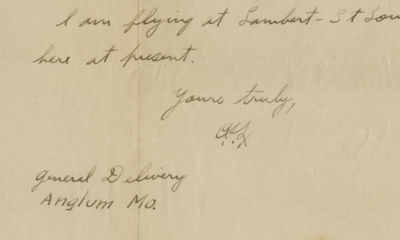 30/04/1925. Charles Lindbergh Acquired from the family and never before offered for saleIt also also relates to his other passion - his motorcycle, which started his interest in machines and transportation while he was a teenagerWhile barnstorming in southern Minnesota, Charles Lindbergh met a graduate of the Army Flying School who told him that cadets flew the most modern and powerful airplanes. Lindbergh enrolled right away and arrived in San Antonio, Texas, on March 15, 1924. Lindbergh was joined by 103 other young men. He graduated first in his class from U.S. Air Service Flying School at Kelly Field in San Antonio, on March 14, 1925. He was commissioned second lieutenant in the Air Service Reserve Corps at that time. Following graduation, in late March 1925, Lindbergh went to Lambert Field in St. Louis, Missouri, to find a job in aviation. In April he accepted a job with the Robertson Aircraft Corporation as chief pilot. Robertson was an aviation service company based at Lambert Field, and it had been awarded the St. Louis-Chicago airmail route. While waiting for that contract, Lindbergh flew at Lambert Field, now as a professional pilot.While Lindbergh is well known for his exploits in the field of aviation, becoming the first pilot to complete a transatlantic flight in 1927. Yet few know that before becoming an airplane pilot, his interest in machines and transportation led Lindbergh to spent his passion and a fair amount of time piloting an Excelsior motorcycle.In 1919, when Lindbergh was in high school, he ordered a new twin-cylinder 1920 model Excelsior ""X"" motorcycle from Martin Engstrom's hardware store in his hometown of Little Falls, Minnesota. The Engstrom and Lindberghs were friends in that town. He paid $290 for the motorcycle and was known around town for his fast and sometimes reckless riding. Locals remember him riding along the steep banks of the Mississippi River past a local power plant on his way back and forth to town. Lindbergh didn't just use the Excelsior for around town rides, it also carried him some significant distances, especially considering the roads at that time. In 1920, he rode from Little Falls to Madison, Wisconsin to attend engineering school at the University of Wisconsin. His marathon Chicago-Louisville run was made in the summer of 1921, when Lindbergh traveled from Madison to Camp Knox, Kentucky, for ROTC training in field artillery. A year later he made a trip to Lincoln, Nebraska where he entered flight school.Lindbergh loved the Excelsior and kept it for 23 years, until finally donating it to the Henry Ford Museum in 1943. Ford and Lindbergh were good friends, so he thought it would be a fitting place to display the motorcycle. The bike sat in original condition for around 30 years, before being fully restored in the 1970's.Autograph letter signed, Anglum, Missouri, located adjacent to Lambert Field near St. Louis, April 30, 1925, to Engstrom, who had sold him the motorcycle. “Several years ago I bought a motorcycle from you and have lost the bill of sale. In order to get a Missouri license, a bill of sale is required. Can you send me a duplicate? I am flying at Lambert-St. Louis Field here at present.”So in this letter Lindbergh not only talks of flying, but mentions Lambert Field. It is the earliest letter of Lindbergh mentioning flying that we have ever seen or can find in a search of public sale records going back decades. That alone makes it an extraordinary find.It is also the only letter of Lindbergh relating to his love of motorcycles we can find. It comes with a photograph of Lindbergh’s motorcycle, on the verso showing the imprint of the Henry Ford Museum. At top left is written, “I sold this motorcycle to Charles Lindbergh in 1919. In 1927 it was put in the Henry Ford Museum, Greenfield Village, Dearborn, Mich.” It is signed M.A. Engstrom and dated October 1st, 1970. Engstrom was elderly when he wrote this, and got the date of Lindbergh’s flight and the date of the donation of the motorcycle wrong. We know from an earlier account by Engstrom that when Lindbergh completed his epochal flight, that in the town of Little Falls, ""People were just wild — they acted like they were mad around here.” There are two other pictures showing Lindbergh on this motorcycle included. (Inventory #: 21130)
$15,000.00 add to cart Available from Raab Collection
Share this item