An Auxiliary Agreement to the Congress of Vienna Treaty, Which Sought to End Napoleon's Rule, Signed by King George IV In it, Great Britain permitted a German state to join the concord of Europe, the first viable attempt to create a European Union 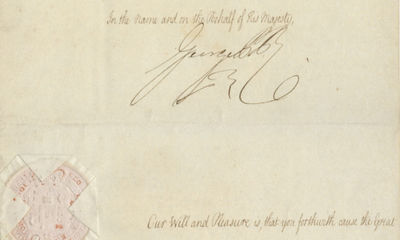 16/12/1816. George IV By 1792 the French Revolution was in the hands of its radicals and the other governments in Europe were convinced they had to intervene to prevent its spread. They invaded France, thus commencing a war that would not end for well over two decades. By its close, France, led by Napoleon, had conquered (at one time or another) much of the continent, and spread its influence pervasively throughout. Virtually no aspect of life in Europe was unaffected by what came to be called the Napoleonic Wars. Finally, on March 31, 1814, the allied forces entered Paris, compelling Napoleon to abdicate.The hostilities were suspended by a convention signed on April 23, and on May 30 the Treaty of Paris was signed ending the state of war. But this was just the start. The victorious European powers determined to reestablish, as far as possible, the order and borders in force in 1792, and to resolve the many other problems that had arisen during revolution and war. They called the Congress of Vienna, which started on September 27, 1814 and concluded with the Treaty of Vienna being signed on June 9, 1815.The Congress proved to be the most important international conference in European history. Although these representatives wanted what was best for their own countries, they followed one fundamental principle: in order to prevent another major war, they wished to create a European ‘balance of power’ which would prevent any one nation from being able to again dominate the continent. The settlement that resulted accomplished this crucial goal, and was the first conference that foresaw what was essentially a European Union. Its discussions continued despite Napoleon’s return from exile and resumption of power in France in March 1815. Just nine days after completion of the Congress’s work, it was in a sense validated when Napoleon was finally defeated at Waterloo and its treaties and agreements could be implemented.The Treaty was then ratified by the powers concerned. The principal figures at Vienna included some of the most remarkable ever brought together under one roof. Representing the principle power, Great Britain, was the cool foreign minister Viscount Castlereagh, aided for a time by the Duke of Wellington. Then there was Tsar Alexander I of Russia with his chief minister Count Nesselrode, the Austrian Emperor Francis I and his enigmatic Prime Minister von Metternich, , the Prussian King Frederick William III with his chancellor von Hardenberg, the Italians Count Capo d’Istria and Pozzo di Borgo, and the wily representative of the post-Napoleonic France, Charles Maurice de Talleyrand, who, by skillfully exploiting differences among the allies, soon obtained an equal voice with the great victorious powers. All other European states, large and petty, that had legally existed before the Napoleonic upheaval were represented by an army of delegates and agents.The alliances designed to uphold the decisions of Vienna and to settle disputes and problems by means of conferences were an important step toward European cooperation. Moreover, the Treaty of Vienna was very effective: it kept the peace for the next forty years and prevented a major conflict in Europe for a century. As another way to look at its accomplishments, unlike the Versailles Treaty of 1919, it contained in none of its provisions the seeds of a future war between the major powers. A further contribution of the Congress was adoption of standard rules of diplomacy.The Treaty of Vienna was so far-reaching that several additional treaties, conventions and agreements were required both to make the settlement effective and to complete the complement of nations signatory. We offer one of the original documents required to allow a state to accede to the Treaty and collateral agreements.Document Signed by King George IV as Prince Regent for his insane father, George III, 2 pages, Palace of Carlton House, London, December 16, 1816, being the Warrant for affixing the Great Seal to the United Kingdom to the ratification of an Act of Acceptance of the Accession. Although other nations needed to give their approval, the approval of the Britain was by far the most consequential. “Our Will and Pleasure is that you cause the Great Seal of the United Kingdon of of Great Britain and Ireland to be affixed to an Instrument bearing date with these presents (a copy whereof was annexed to the Warrant of this date) containing Our Acceptance in duplicate, in the name and on behalf of His Majesty, of an Act of Accession on the part of His Royal Highness the Grand Duke of Baden to the to the General Treaty signed in Congress at Vienna on the ninth day of June 1815, as well as to the treaties, conventions, declarations, regulations, and other acts recited in the 118th Article of the said General Treaty. And for so doing, this shall be your Warrant.” It is also signed by Castlereagh, who recites that this document is “By command of His Royal Highness The Prince Regent.” Baden is now in southern Germany by the Swiss border.The Congress of Vienna was the crowning moment in diplomatic history and established a European order that lasted a century. This document was an important link in the chain of agreements that created that order. Documents such as this relating to the epochal Congress of Vienna and signed by the chief party to the accord, seldom reach the market. (Inventory #: 21250)
$5,500.00 add to cart Available from Raab Collection
Share this item