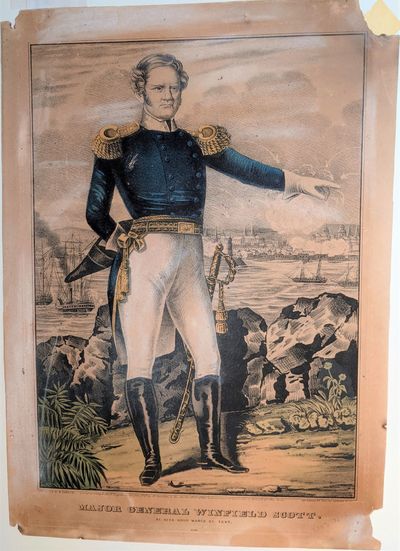 New York: MAJOR GENERAL WINFRIELD SCOTT. At Vera Cruz March 25, 1847, 1847. Folio.  355 x 250 mm., [ 14 x 10 inches].  Handsome lithographic portrait printed in tone of black and highlighted with blue, yellow, white, and green wash.  Paper stock foxed and toned brown, a few chips at the corners; matted.
Full length portrait in uniform on the battle field in Vera Cruz, the first crucial victory of the Mexican War that led to the capture and control of Mexico City and an end to the war.  An often times candidate for the Presidency, Scott was highly regarded as a military leader, and though a Southerner he became a confidant of Lincoln's during the Civil War.  From a historical point of views General Scott is considered one of the most important generals in American history.
This is an important example of the production of inexpensive lithographic prints which illustrated the story of contemporary American history for the general public.  In his advertisements Currier labelled his company as the "Grand Central Depot for Cheap and Popular Prints".
Appleton's Cyclopaedia of American Biography, V, p., 440-442.  Jane Cooper Bland, Currier & Ives, A Manual for Collectors, No. 468.  . (Inventory #: 844)
$250.12 add to cart Available from
De Simone Company
Share this item
De Simone Company, Booksellers
Offered by