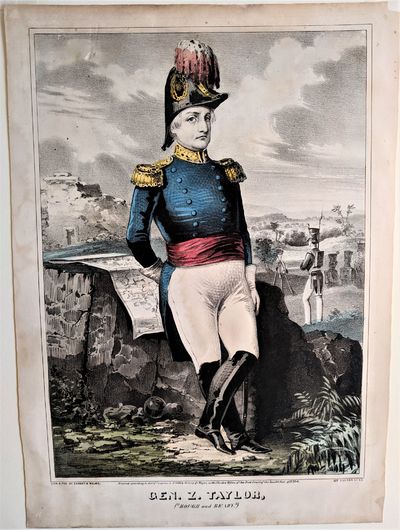 New York: Lith. & Pub.by Sarony & Major, 1846. Folio.  355 x 255 mm., [14 x 10 inches].  image size 300 x 220 mm., [11 ¾ x 8 ¾ inches]. Lithograph printed in tones of back and highlighted in blue, yellow, red, and green wash.  Paper stock show discoloration in margins and on back, remnants of tide marks on the verso of the print; paper generally in good condition and image clear and the colors very strong. Matted.
Lithographic portrait, produced by the firm Sarony & Major, that was published soon after the outbreak of the Mexican war in 1846 and Taylors early victories at the Rio Grande River. It was at this time that he was promoted to the rank of full general and became a hero to the American public.  The lithograph shows Taylor in a battlefield setting with troops, maps, canon balls, and military equipment in the background.  His figure is highlighted with a dominant red sash, gold (yellow) epaulettes, and a helmet decorated with a red and white plumb.  His facial features are pronounced, and his gaze is directly at the viewer.
Napoleon Sarony, a painter by training, learned the art of lithography under the tutelage of Henry Robinson and Nathaniel Currier.  He went on his own in the early 1840's and teamed up with James Major in 1846, a partnership which was to last two decades.  His portraits were always painterly in composition and executed with care and detail that were hallmarks of his work.
Appleton's Cyclopaedia of American Biography, V. pp. 51-56.  Harry T. Peters, American on Stone, pp. 350-357.  (846. (Inventory #: 846)
$300.15 add to cart Available from
De Simone Company
Share this item
De Simone Company, Booksellers
Offered by