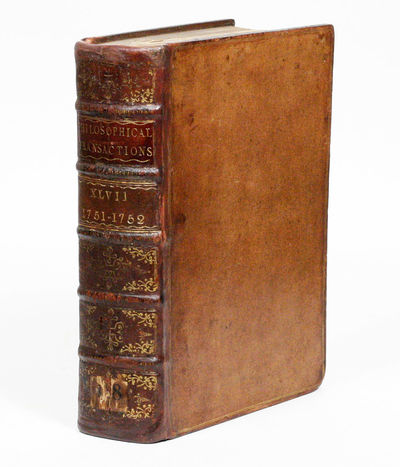 WITH AN EARLIER PAPER DISCUSSING HIS THEORIES OF THE NATURE OF LIGHTNING. "Franklin was the first American scientist to achieve an international reputation, with his work on electricity...The most dramatic result of Franklin's researches was the proof that lightning is really an electrical phenomenon. Others had made such a suggestion before him - even Newton himself - but it was he who provided the experimental proof. In 1752 he flew a kite in a thunderstorm and attached a key to its string. From this he collected electrical charges in a Leiden jar and showed that atmospheric and frictional or machine-made electricity are the same. He went on to propose the fixing of iron rods at the top of buildings, masts of ships, etc., from which he conducted the electric charges they collected from lightning into the wet subsoil - the invention of the lightning conductor" (Printing and the Mind of Man, 199).

"Franklin imagined that he might be able to obtain the same evidence [that lightning is electrical] by flying a kite at the approach of a thunderstorm. In June 1752, as dark clouds came up, he tried the kite experiment. He knew the hemp string attached to the kite would conduct electricity. Franklin ran the string from the kite to a Leyden jar, insulating himself by holding a silk ribbon to the string. When he observed the fibers on the hemp string stand out, he realized the experiment had succeeded. It must have been one of the most satisfying moments of his life. Franklin had proven electricity to be a basic element of nature. In late July he learned of the sentry box experiment's success in France. 'This engag'd the public Attention everywhere' (Autobiography, p. 133). Franklin became the most famous natural philosopher since Isaac Newton, and, in the popular mind, more so, since Newton's theories were not generally understood nor their profound significance widely recognized. In 1756 Immanuel Kant dubbed Franklin the 'Prometheus of modern time' (Papers, vol. 20, p. 490). American National Biography.

Also includes a review of the first part of Franklin's Experiments and Observations on Electricity (pp. 202-211) and a letter from William Watson (pp. 567-570) discussing Franklin's experiments.