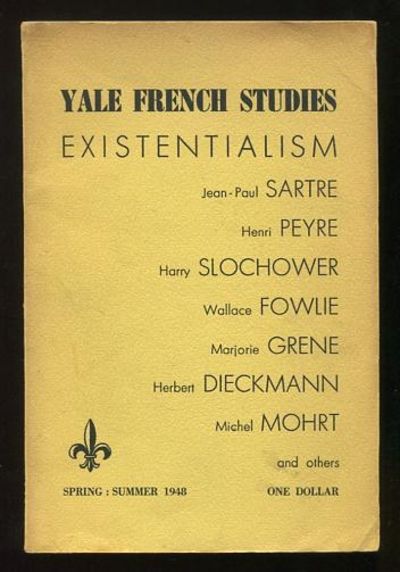 by (Cohn, Robert Greer, ed.)
New Haven CT: Yale University. Very Good. 1948. (Vol. 1, No. 1). Journal. [moderate age-toning to spine and along edges of covers, light external soiling]. The inaugural issue of this long-running literary journal, which continues to this day, self-described as "the oldest English-language journal in the United States devoted to French and Francophone literature and culture." In this issue, devoted entirely to the topic of existentialism, Jean-Paul Sartre was given the first word, with excerpted scenes from his then-current play "Les mains sales." This was followed by sixteen essays on topics ranging from general discussions of existentialism to analyses of individual works by Sartre, Albert Camus, Simone de Beauvoir, and others. Notable contributors were Henri Peyre, Wallace Fowlie, and Herbert Dieckmann. (Seventy years later, the publication revisited the topic of existentialism in its issue no. 135-136.) . (Inventory #: 26765)
$200.00 add to cart Available from ReadInk
Share this item
ReadInk
Offered by