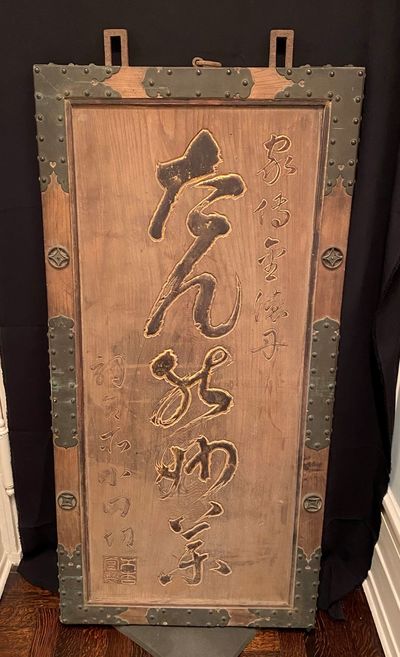 by KANBAN: PHARMACEUTICAL STORE SIGNBOARD
Wooden board with thick frame (1360 x 650 x 70 mm.), orig. metalwork pieces on sides & corners, with orig. metal fittings on top to facilitate hanging perpendicularly outside the shop. Both sides carved with characters of the same text, one side artfully carved in sosho tai (a calligraphic cursive script), the other side finely carved in gyosho tai (a semi-cursive script), with furigana reading marks. Characters painted with black pigment & highlighted in gold lacquer. [Japan]: date of manufacture of the board is engraved on one of the cornerpieces (in trans.): "February 1804" by "kazarishi Kinjiro Kamiya" ("ornamental metalwork artisan Kinjiro Kamiya") at the request of "Magobei Tsuneyuki Odagiri." "Kanban, a distinctive fusion of art and commerce, refers to the traditional signs Japanese merchants and craftsmen displayed street-side to advertise their presence, denote the products or services found inside, and give individual identity and expression to the shop itself. Created from wood, bamboo, iron, paper, fabric, lacquer, or even stone, kanban form a rich visual vocabulary of traditional advertising... "The Japanese seem to have excelled at this early take on Madison Avenue, creating a multi-faceted inventory of symbol and meaning designed to engage the viewer and entice the customer. From a hand-carved sign made by the shopkeeper himself, hanging over the doorway to his modest shop in the smallest of back-country hamlets, to a sumptuous and professionally rendered virtuoso of a sign mounted atop a tall post in the booming capital city of Edo, kanban were an integral part of Japanese trade culture... "Kanban were also, in many instances, collaborative efforts between merchants and the craftsmen employed to create the signs...[The merchant] would have had to call on the services of a kanban-shi (kanban carver) or a kanban-gaki or mono-gaki, specialists in calligraphy for kanban. Or perhaps he would have engaged an on-gaku who specialized in carving frames and name signs. Together they would have arrived at the most effective way to communicate the desired message. The type of kanban and the degree of ornamentation would have depended on both the technical skills of the kanban-shi and the depth of the pockets of the merchant employing him."-Alan Scott Pate, Kanban. Traditional Shop Signs of Japan (Mingei Museum & Princeton University Press: 2017), pp. 13 & 19-20. This is an unusually early, large, and monumental kanban, secured by a large and thick wooden frame and, unusually, decorated with metalwork around and on the frame. Much thought has gone into the design. On one side, the characters are carved in sosho tai (a calligraphic cursive script), which not all of the general public could read. Therefore, the other side of the board is carved in gyosho tai (a semi-cursive script), with furigana reading marks, to facilitate reading by all potential customers. The central text on both sides, in largest characters, visually screams "Tan no myoyaku" ("Miracle Medicine for Mucus Relief ") as an attention-getter. In smaller characters, in the bottom left, we have "Chogosho Odagiri" ("Odagiri Pharmaceutical Company"), with what we believe is the trade name seal of Odagiri. In the upper right, again in smaller characters, we have "Kaden Kintokutan" ("Family Recipe passed down Golden Virtue Pills"). The medicine produced by the Odagiri Pharmaceutical Company, in pill form, was to reduce sputum in the throat and ease swallowing. Most kanban were made by anonymous artisans, and it is very unusual to have the metalwork signed, and dated as we have with this kanban. In fine condition. (Inventory #: 7603)
$6,500.00 add to cart or Buy Direct from
Jonathan A. Hill, Bookseller
Share this item
Jonathan A. Hill, Bookseller, Inc.
Offered by