"Forget Me Not" Album -- a Philadelphia Album Amicorum 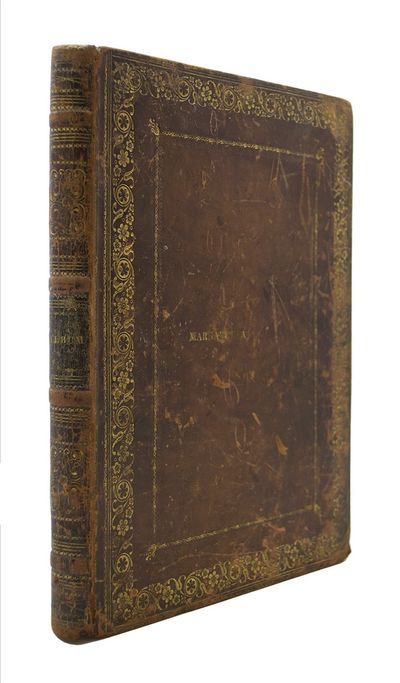 by ALBUM AMICORUM
A Early Nineteenth-Century American Album Amicorm [ALBUM AMICORUM.]. CANNON, Margaret A. "Forget Me Not" Album -- a Philadelphia Album Amicorum (1829-1833). Philadelphia and Frankfort, PA, 1829-1833. Quarto (9 1/2 x 7 1/2 inches; 241 x 190 mm). 73 unnumbered leaves. With cursive ink manuscript in various hands on recto of most pages. Some with hand-colored drawing, generally floral designs. A few small drawing tipped in. With evidence of some excised leaves, missing paste-ons etc. The album's paper stock was made in Philadelphia by W. Amies & Co. and bears their watermark ["W. Amies & Co." -- "Phila." -- Dove bearing olive branch], likely produced ca. 1828 or 1829. A small unopened hand colored envelope and bookmark, both dated 1905 laid in. Full contemporary calf. Boards and spine elaborately tooled in gilt. Spine with black morocco spine label, lettered in gilt. Front board with albumís owner Margaret A. Connonís name stamped in gilt. With beautiful color striped endpapers. Gilt of the last name rubbed off. Boards are very worn, rubbed and scuffed. Pages are toned and soiled. But still all the entries are clear and unfaded. Overall a very nice example. This Album amicorum was complied by Margaret A. Cannon and contains numerous poems in various manuscript hands, and most are dedicated to Margaret. Some are signed and some are dated and labeled with the location. These are marked Frankford (8 miles from downtown Philadelphia) or Philadelphia. The earliest poem is dated June 26, 1829 (at Philadelphia); the majority of the poems were inscribed in 1829-1831. Two poems are dated July 26, 1831 and the latest poem was written at Philadelphia on July 24, 1833. The subject of most of the poetry is friendship, love and affection. The final poem in the album quotes the Famous American Poet Philip Freneau. Freneau was considered ìThe Poet of the American Revolutionî and died in 1832. In the album the poem is entitled ìLibertyî but it is actually taken from the first two stanzaís of his poem ìOn the Great Western Canal of the State of New Yorkî and reads: ìThe nation true to honor's cause, To equal rights and equal laws , Is well secured, and well released From the proud monarchs of the east. Thus Holland rose from Spain's controul, And thus shall rise from pole to pole Those systems formed on reason's plan That vindicate the Rights of man.î HBS 68478. $1,250 (Inventory #: 68478)
$1,250.00 add to cart Available from
Heritage Book Shop
Share this item