The Navigator: containing directions for navigating the Monongahela, Allegheny, Ohio, and Mississippi Rivers; with an ample account of these much admired waters, from the head of the former to the mouth of the latter; and a concise description of their towns, villages, harbours, settlements, &c. with accurate maps of the Ohio and Mississippi. To which is added, an Appendix, containing an account of Louisiana, and of the Missouri and Columbia Rivers, as discovered by the voyage under Captains Lewis and Clarke. Seventh edition -- Improved and enlarged 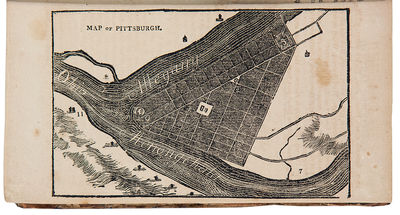 by [CRAMER, Zadok]
Pittsburgh: printed and published by Cramer, Spear & Eichbaum, 1811. 12mo. (6 3/4 x 4 inches). 295, [1]pp. 28 full-page woodcut maps (including one of Pittsburgh, 13 of the Ohio and 13 of the Mississippi). Tipped to the title of this copy is a printed letter from James Smith to the publishers about alterations to channels in the Mississippi. Contemporary quarter calf-backed marbled boards, minor spine repair, spine flat, red morocco lettering piece.

The first navigational guide to the Mississippi River.

Cramer had been in Pittsburgh but a short time when he realized the necessity for a publication giving detailed information for navigating the Western rivers. It is generally supposed that the first edition of The Navigator was published in 1801 yet no copy bearing that date is known to be in existence. There are extant several copies of the edition of 1802. The earlier editions were small octavo pamphlets bound in coarse paper covers, the third containing some forty pages. First published in this form in 1806, a key to the success and longevity of the guide were the frequent republications, some with additions. The first edition to include information from Lewis & Clark's discoveries was published in 1808. Cramer declared that he had obtained the information set forth "From the journals of gentlemen of observation, and now minutely corrected by several persons who have navigated those rivers for fifteen and twenty years." Cramer's Navigator was the "most widely used guide to western waters in the early period, both before and after the application of steam in 1807" (Howes).