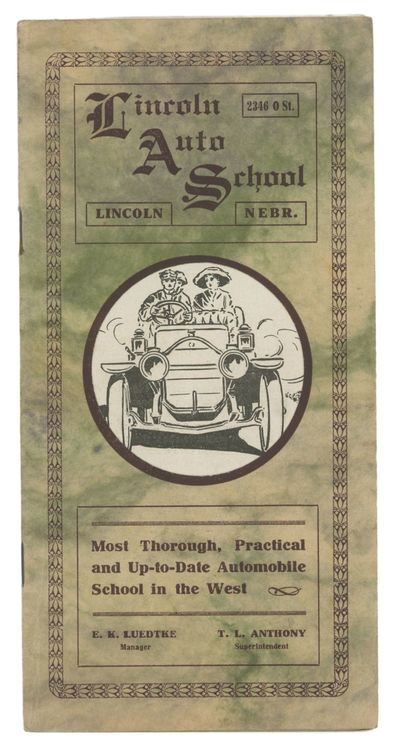 Lincoln, Nebraska: Lincoln Auto School, 1911. Wraps. Near fine. Unpaginated, [16] p. with numerous textual photographs and illustrations. Original printed green paper wrappers, bound with two staples. The front panel is die-cut, with a fold over flap along the right edge. Negligible rusting to the staples, with just a hint of edgewear. Near fine.

T.L. Anthony, a machinist at Cushman Motor Works, formed the Lincoln Auto School in 1910 - the same year Henry Ford opened his innovative Highland Park, Michigan mass production plant. The for-profit mechanics trade school was located at 2346 O Street and after the First World War, operated as the Lincoln Auto & Tractor Co. It gradually added aircraft mechanics to the curriculum and during the Second World War, served as a certified training facility for U.S. Army Air Corps ground crews and mechanics.

Published shortly after the school's inception, this booklet promotes the opportunities afforded by learning the automobile business:

"Progress in the automobile industry during the past ten years has been phenomenal. There was at that time only 3,270 automobiles in America and not more than 2,510 men employed in the business. The latest statistics show there are over 1,500,000 cars now in use. These cars demand the employment of many men, not alone men as chauffeurs and repairmen, but men as salesmen and demonstrators."

It includes a detailed description of the school's curriculum, amenities, and facilities, which are shown in 15 photographic images. There is also a sample diploma, a sectional view of the Stearns-Knight Four-Cylinder Motor, a clever centerfold rendering of a disassembled automobile, and portraits of T.L. Anthony, Superintendent and E.K. Luedtke, Manager.