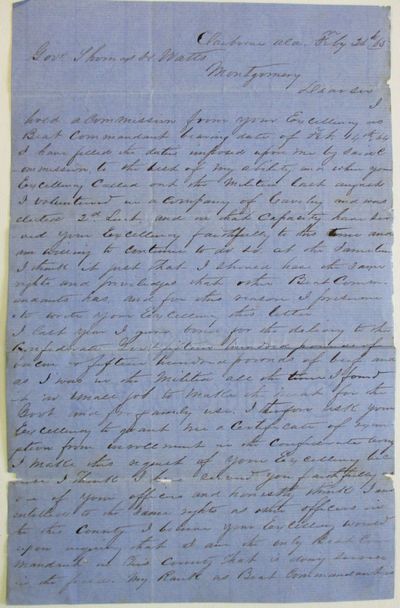 The author was Jonathan Q. English [1831-1865], a farmer from Monroe County, Alabama. He was 2nd Lieutenant of the mounted Alabama Infantry Company known as the English Independent Cavalry, or Watts' Rangers, which had been formed by his cousin, Capt. Thomas C. English [1819-1884], a brother-in-law of Gen. George McClellan. Less than seven weeks after writing this Letter English died near his home during the Battle of Eliska, near the Baldwin/Monroe County line. Very few of the Company's men survived the Battle; but his cousin Thomas survived and was promoted to Major. At the time of his death, Jonathan had a wife and four young children. (Inventory #: 37121)
$250.00 add to cart or Buy Direct from
David M. Lesser, Fine Antiquarian
Share this item
David M. Lesser, Fine Antiquarian Books LLC
Offered by