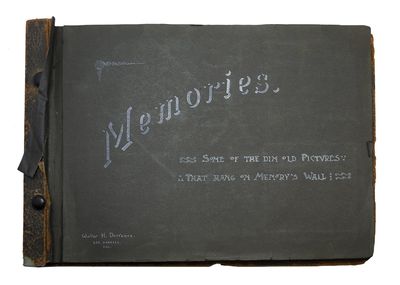 by ALBUM
A Lovely Scrapbook From A Los Angeles Couple During the Early 1900s. [PHOTO ALBUM]. [CALIFORNIA]. DORRANCE, Walter and Gertrude. ìMemories, Some of the Dim Old Pictures That Hang on Memory's Wall.î [Los Angeles, Mexico, et al, 1905-1914]. Oblong quarto (9 7/8 x 13 1/4 inches; 250 x 340 mm). 29 leaves with photos on both sides. Leaves are black card stock. Album pages are almost completely filled with extensive manuscript annotations in white ink or pencil in a very neat and readable hand, identifying the photographs. The annotations range from photo captions to small drawings to poems. Album includes approximately 180 photographs (a few loosely laid in) and approximately 54 pieces of ephemera, including postcards, invitations, and news clippings; five original cartoon illustrations; and seven holograph sentimental poems by popular authors Susan Marr Spalding, Reynale Smith Pickering, Charles Hanford Jr., Robert Bridges, and others. ìPhoto album and scrap book documenting the courtship and first few years of marriage of the Los Angeles couple Walter Harbaugh Dorrance (1872-1961) and his wife Johanna Gertrude, nÈe Van der Goorberg (1885-1974). Genealogical records show that Dorrance was born and raised in Jackson, Michigan, and the album indicates that many of the places he and his wife visited in California and Mexico were entirely new to him. Gertrude Dorrance was born in Holland, emigrating to the United States when she was five years old, her family settling in Los Angeles, and she appears to have lived the rest of her life in the city and its environs.î (L.N.Golay) The album features photographs and ephemera pertaining to their first meeting, at the Leap Year Reception of the Young Men's League at the Memorial Baptist Church on April 29, 1904, their marriage which took place at the home of Mr. J.I. Seamans (141 W. 23rd Street) on August 22, 1905. Following their wedding came their honeymoon to San Diego where they visited the harbor, La Jolla, ìTia Juanaî Mexico, and Coronado where they stayed in the Coronado Beach ìtent city amd with a menu from dinner.î These pages are followed by photos of their first homes throughout Los Angeles in locals such as Eagle Rock and Mt. Washington and and visits to Pomona, Santa Barbara, Catalina and the Bay Area. Their first son ìTeddyî was born on 9/3/1908 and and their daughter ìBarbaraî a few years later. Bound in black morocco post-bound flexible boards lettered in gilt with ìMemories" on the front board. Front board is detached. Extremities are worn, rubbed and flaking. With an occasional loose photograph and glue remnants of a few detached items. Overall, the album is in good condition but the contents and photos are very good. HBS 68483. $1,650 (Inventory #: 68483)
$1,650.00 add to cart Available from
Heritage Book Shop
Share this item