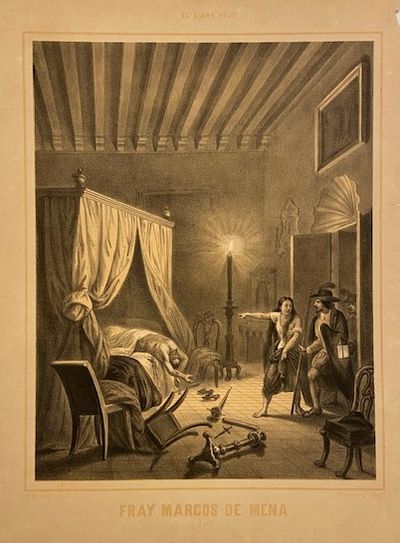 by IRIARTE, Hesiquio
Mexico City: Diaz de Leon y White, 1870. Primitivo Miranda. Lithograph. Image measures 14 1/2" x 10 1/2". Toning and chips to margins, repair to lower margin. This dramatic print depicts a scene from 16th century Mexico, illustrating an three-part historical account titled "Fray Marcos de Mena". A man is seen splayed across a bed, bleeding from wounds in his ribs and arms. A woman frantically ushers two men into the room, pointing to the men. Weapons and furniture are knocked over, adding to the sense of urgency and chaos in the room. In the text, Payno identifies the wounded man as Juan [Gonzalez] Ponce de Leon, possibly the son of the famous conquistador. The woman, his wife Dona Catalina, was suspected of conspiring with her lover, Don Bernandino Bocanegro, to murder her husband. In Payno's fictionalized account, she claims to authorities that thieves were responsible for the murder. She was later banished from Mexico, and thought to be aboard the 1553 fleet that left Veracruz for Havana before wrecking off the coast of Texas. Fray Marcos de Mena, a Dominican friar, is remembered as the sole survivor of the wreck. Print made by Mexican lithographer Hesiquio Iriarte, after artwork by Primitivo Miranda, Mexican sculptor and neoclassical painter. Published in "El Libro Rojo: 1520-1867", by Riva Palacio and Manuel Payno, an illustrated history of civil violence and suffering in Mexico spanning the Spanish Conquest, the Inquisition, up to the French Intervention. The plates include images of plague, torture, and murder, depicting various political and religious martyrs throughout Mexico's early history. Vicente Riva Palacio (1832-1896) was a lawyer and writer, and the grandson of Vicente Guerrero, revolutionary genera and 2nd president of Mexico. Manuel Payno (1810-1894) was a Mexican writer, journalist, politician and diplomat. Both men were liberal intellectuals, and this book sought to commemorate the martyrs and oppressed who shed blood for the nation. The work of both authors continue to be influential to Mexican literature, art, and national identity. (Inventory #: 299873)
$275.00 add to cart or Buy Direct from
Argosy Book Store
Share this item