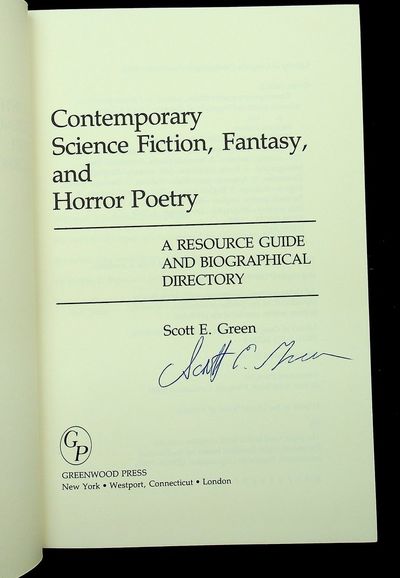 by Green, Scott E.
New York, Westport, Connecticut, London: Greenwood Press, 1989. First Edition. Cloth. Near Fine. First Edition. xviii, 216, [1] pages. 8vo. Publisher's dark grey cloth with pink/black titles and printing. SIGNED by author Green on the title page. A sound clean copy. Cloth. "[The] First genre reference work, concentrating primarily upon the 1970s-1980s. Poets who have been published in leading commercial SF magazines, such as Amazing and Isaac Asimov's Science Fiction Magazine, are listed with dates of their appearances. Similar listings are given for such small press journals as The Magazine of Speculative Poetry and Star*Line. Numerous SF anthologies with poetry inclusions are listed, as well as several SF poetry anthologies, including Rhysling nomination anthologies. Winners of Rhysling and SPWAO ... awards are given. Poets' directory records 155 then active poets, with mailing addresses (circa 1988) but lacking in other biographical details. Includes pithy, if sometimes subjective, critical assessments of their work, as well as awards, key magazine and anthology apperaances, and titles of major collections. Overall, this directory is biased toward poets publishing in commercial markets, resulting in stronger coverage of SF or speculative poetry than of horror or other fantasy verse."

1960
(click for more details about [ Original artwork, computer ] "Say, I'd like for our computer to meet your computer!)

[ no publication place ] : [ no publisher noted ] , 1870
(click for more details about [ Photograph, cabinet card ] Cabinet card of poet and editor William Cullen Bryant with facsimile signature beneath)
View all from this seller>