Into the night life... [with extra material] 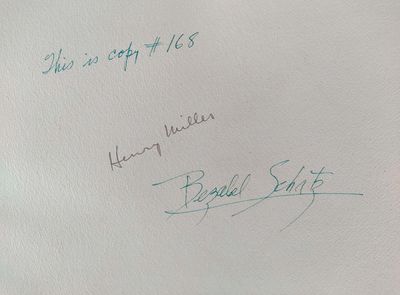 by Miller, Henry; Bezalel Schatz.
Berkeley: Henry Miller and Bezalel Schatz, 1947. Copy # 168, signed by author and artist. Very Good/The tortured publication history of this title begins with the sixteen months that Miller and Bezalel took to produce the sheets (with the help of printer Alfred Stoddard) in an edition of 800 copies. A prospectus apparently failed to generate subscribers so, according to Schifreen and Jackson, fewer than 200 copies were bound (Hargrave estimates even fewer). The sheets were then stored in a closet, suffering damage from vermin and deterioration from mold. Salvagable sheets were reissued in 1971 (some of them in a modified binding, and some of the wormy sheets were then acquired by Coast Gallery in 1976 and bound for sale. Our copy, #168, is surely from the original 1947 issue (with the red fabric patch on the upper board). In the opening text, Miller calls the book "a Coney Island of the mind." (Ferlinghetti's book of the same name appeared eleven years later.) . 37 cm; [40] leaves (including two leaves printed on glassine), silkscreened in color throughout. Text written in author's hand and color silkscreened. Bound in blue cloth with Bezalel's screened shapes and a piece of red fabric, by Eda Kairn. LACKS slip case. SIGNED by Miller and Schatz on justification page. Slight wear at extremities. Unblemished text. References: Shifreen & Jackson A60a; Hargraves, #30. ADDITIONALLY: a silkscreened bifolium, 315 x 385 mm, heavy white paper, reproducing two pages of the book with text and illustration, signed by Miller and Bezalel; edges a little pinched; AND a three-panel glassine sheet, frayed, printed on one panel with the full text of the title page, which reads: "The one and only life is the night life, the life of the mind, the night of night, the life, the mind, the night, the night life. The is the Coney Island of the mind, the Toboggan Slide, the Into the Into. The is the without which wherefore and however of the night's bright mind, the life and mind of night, the mind and night of night, or, Into the Night Life, with Henry Miller and Bezalel Schatz. (Inventory #: 6377)
$1,800.00 add to cart Available from
Rodger Friedman Rare Book Studio
Share this item
Rodger Friedman Rare Book Studio
Offered by