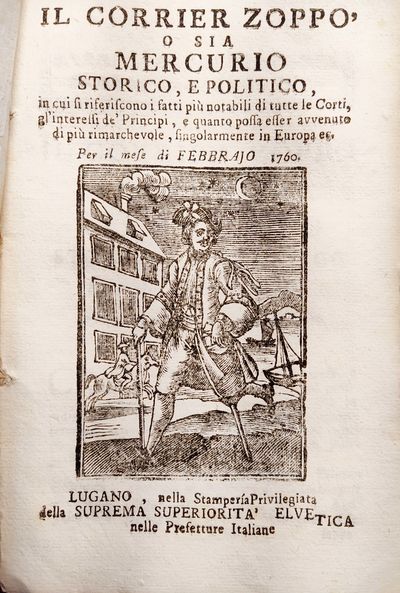 by [Agnelli, Giovan Battista, ed.].
Lugano: Stamperia Elvetica, 1760. Very Good/Il Corrier Zoppo ("The Limping Messenger") ran from December 1756 to December 1762, out of Lugano, Switzerland. Each issue, in uniform format, presents news of the world, with dispatches from the various capital cities of Europe in terms of military developments, changes in political leadership, marriages and deaths among nobility, and some of what might be called investigative reporting, such as the lengthy article (pp. 344-371) on the kidnapping of a papal emissary to Corsica by the Genoese (that ultimately led to Genoa divesting itself of Corsica). There is news of the French attempt to regain Quebec in April of that year (the "Battle of Sainte-Foy"), and of Murray's heavy losses defending his control of the city. There is news of battles in India, in Eastern Europe, in America and Asia, with much primary material (missives and dispatches) quoted in full. Agnelli, whose firm was well established in Milan, opened the Lugano office in 1746, printing various popular material including an astrological almanac aimed at the less literate public, and a news gazette, "Le Nuove delle corti di Europa," for the emerging caffè society. Le Nuove eventually morphed into Il Corrier Zoppo, a dependable news and gossip magazine aimed at an engaged readership with an international perspective.. 17 cm; 11 (of 12) monthly issues, January through March, May through December, continuously paginated 1-208, 275-924 (lacks April, pp. 209-274), and woodcut title page in each number. All issues variously bound in polychrome or monochrome woodblock printed wraps, mostly in floral patterns, stab-sewn. Some leaves darkened but overall bright and clean. Reference: Motta, Bibliografia storica ticinese, p. 122, #1. (Inventory #: 6367)
$1,250.00 add to cart Available from
Rodger Friedman Rare Book Studio
Share this item
Rodger Friedman Rare Book Studio
Offered by