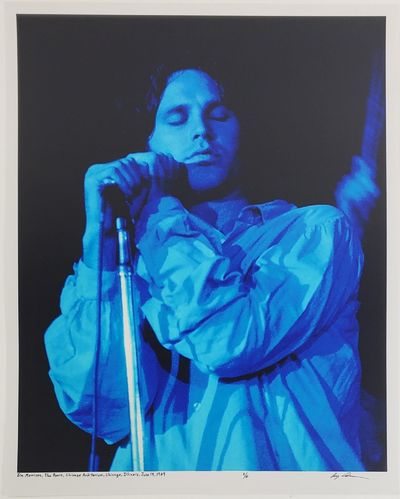 
Jerry said: "This was the second Doors concert that I attended. One year before, Jim had been very boisterous, and caused a small riot by asking the 10,000-member audience to rush the stage. This concert, one year later, was completely the opposite-he was very relaxed and the group gave a calm yet still riveting performance."


Second Story Books is pleased to present a collection of photographs taken by Jerry of leading figures in the entertainment industry between 1967 and 1996. Most of these photographs have never before been published. All are signed by Jerry and are part of limited edition runs. Second Story Books and Jerry Aronson guarantee that no further copies of these photos at these sizes will be issued once these editions are sold. 1342470. Arts & Antiques. (Inventory #: 1342470)
$900.00 add to cart or Buy Direct from
Second Story Books
Share this item