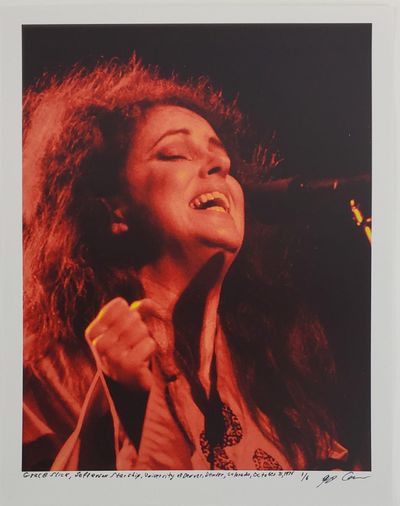 by Aronson, Jerry
Denver, 1975. Limited Edition. Description: Grace Slick, of the band Jefferson Starship, at the University of Denver in Denver, Colorado. October 31, 1975. Signed by Jerry Aronson, the photographer.


Jerry said: "I was photographing Grace for a short-lived local newspaper, The Rocky Mountain Musical Express. I was invited to meet privately with both Grace and Paul Kantner, her husband at the time and the Jefferson Starship lead guitarist."


Second Story Books is pleased to present a collection of photographs taken by Jerry of leading figures in the entertainment industry between 1967 and 1996. Most of these photographs have never before been published. All are signed by Jerry and are part of limited edition runs. 1342487. Arts & Antiques. (Inventory #: 1342487)
$600.00 add to cart or Buy Direct from
Second Story Books
Share this item