American atlas of the wars of the French Revolution and Napoleon 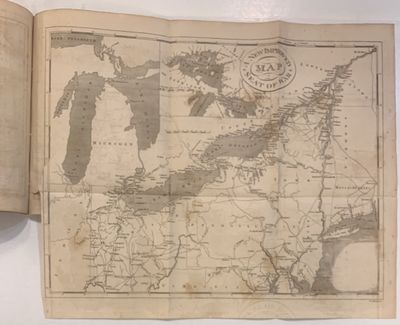 by YEAGER, James
Philadelphia: McCarty & Davis. Small 8vo, unbound. With 14 engraved plates, including 9 maps, 3 battle plans, and 2 views. Ink Inscription by J. J. Noah to Maj Gen[eral]. Geo[rge]. H[enry]. Thomas. Stains and foxing throughout, a mend to the larger map and no title page but otherwise in good condition. Rare composite atlas circa 1816, featuring the Napoleonic wars. Plates include, Frontiers of France Germany and Holland, Italy with the Alpine Frontiers, Plan of the Battle of the Nile, Map of Germany as designed by the Peace of Paris, Egypt and part of Syria, Plan of the Commencement of the Battle of Trafalgar, Spain and Portugal, Map of the French Empire, A New and Improved map of the Seat of War, Chart of the Belgic Campaign of 1815, Battle of Waterloo view with explanatory key sheet, and Europe according to the general treaty of Vienna. (Inventory #: 300669)
$4,500.00 add to cart or Buy Direct from
Argosy Book Store
Share this item

New York : Harper , 1931
(click for more details about Fatal Interview: Sonnets)
View all from this seller>