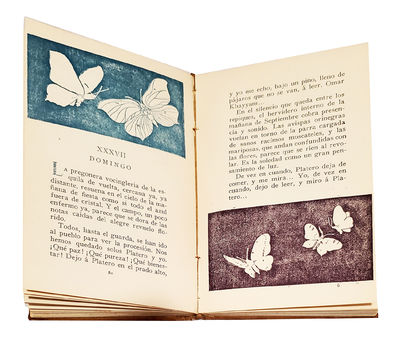 by JIMÉNEZ, Juan; JIMENEZ, Juan; JIM HODGES
1914. "A PROSE-POEM AND A MASTERPIECE" JIMÉNEZ, Juan Ramon. Platero y yo, elegia andaluza... [3]-142 pp. (plus advertisement leaf). Illustrated throughout in colour by Fernando Marco. 8vo., 169 x 100 mm, bound in publisher's tan cloth covered boards, in a new purple cloth folding box. Madrid: Ediciones de "La Lectura," 1914. First Edition of Jimenez's most famous book, beautifully illustrated by Fernando Marco. Published by a small Spanish press during World War I (on 12 December 1914) it has become, for obvious reasons, very rare. This work was chosen as one of the "Books of the Century" by the New York Public Library. The compilers of the exhibition catalogue pronounce: "This book graces childhood homes in Spanish-speaking households throughout the world. A prose-poem and a masterpiece, it was an early success of Juan Ramon Jimenez, who was awarded the Nobel Prize in Literature in 1956. The book chronicles the wanderings over a single year of Platero, a small, hairy donkey 'with a little gay trot like laughter,' and the beast's contemplative master. The pair travel through the stark and fabled countryside of the province of Andalusia in southern Spain, encountering its peasants, gypsies, and sweet, viva-cious children. The critic Michael Predmore noted regretfully that much of the commentary this work has attracted is 'sheer eulogy,' because the book in not the simple, lyric tale it at first appears to be. A closer reading shows that it also contains 'ritual elements in a great seasonal drama' and thus becomes a profound meditation on the universal themes of death, rebirth, and resurrection" (p. 192). This copy is without wrappers, and would appear to be from a portion of the first printing that was not approved by the author. Hinges repaired, internally fine and clean. Fundacion Juan March, The Avant-Garde Applied 1890-1950, No. 354. NYPL, Books of the Century, 192. Palau 124402. (Inventory #: 168882)
$5,750.00 add to cart or Buy Direct from
Ursus Rare Books
Share this item
Ursus Rare Books
Offered by

Four Hand-Coloured Copper-plate Etchings from the Conquest of China.

1775
(click for more details about Four Hand-Coloured Copper-plate Etchings from the Conquest of China.)

by BAUMANN, Paul; WITH: