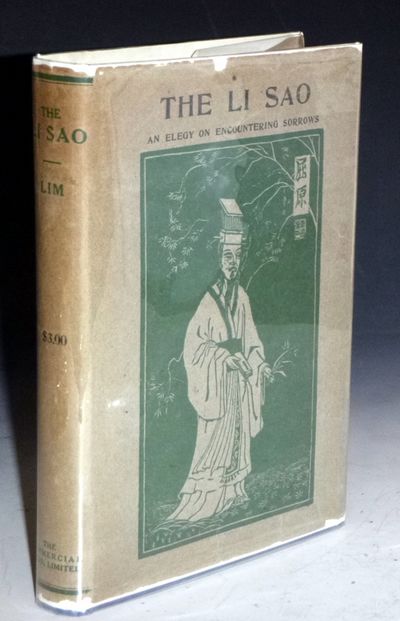 by Yuan Qu, Approximately 344-277 B.C.
Shanghai: Commercial Press, 1935. Octavo. XI, 225 Pages, 4 leaves of plates; illustrations, facsmile, folded map. Li Sao (Lisso) is seen as the authentic work of Qu Yuan. The poem is considered to be an encoded self-portrait of the poet who, as minsiter of King Huai of Chu (reigned 328-299 B.C. repeatedly suffered misunderstandings, slanders, and intrigues. Finally, he was dismissed from his office and after years of wandering in exile, he put an end to his life by drowning himself in the Miluo River. It was while Rabindranath Tagore was on an intellectual pilgrimmage that he visited the Malay peninsula in 1927 to discuss ideas with Lim Boon Keng who had recently completed a translation of Li--Siao' Elegy. He became enchanted with the life and eath of Qu-yuan. As he read the manuscript of Lim's translation, he wanted to write this foreword. In addition, this seminal work has an introduction by Sir Hugh Clifford, and Professor H.A. Giles. A lovely copy with the very scarce dust jacket in very good condition. (Inventory #: 028175)
$375.00 add to cart or Buy Direct from
ALCUIN BOOKS, ABAA
Share this item

The Unplesant Profession of Jonathan Hoag

by Heinlein, Robert A.

New York : Brewer and Warren , 1930
(click for more details about N By E.)
View all from this seller>