THIS LAND WAS OURS: THE DEL VALLES AND CAMULOS 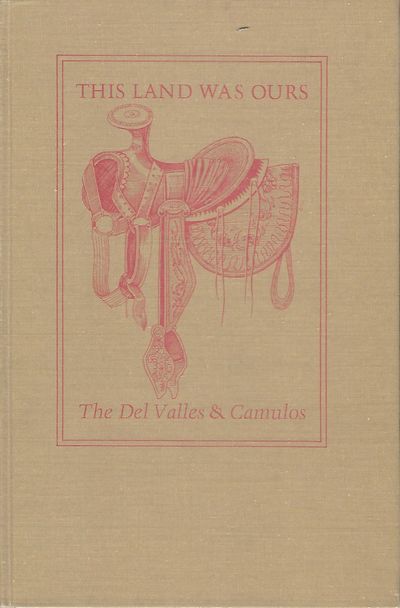 by SMITH, Wallace E.
Venture, California: Ventura County Historical Society, 1977. First Edition. Limited Edition of 1,000 copies. Signed presentation from Smith on a front black page: "For Everett H. Black- Wallace E. Smith. Ventura Nov. 1978." Rancho Camulos, now known as Rancho Camulos Museum, is a ranch located in the Santa Clara River Valley. California. It was the home of Ygnacio del Valle, a Californio alcalde of the Pueblo de Los Angeles in the 19th century and later elected member of the California State Assembly. The ranch was known as the Home of Ramona because it was widely believed to have been the setting of the popular 1884 novel Ramona by Helen Hunt Jackson. The novel helped to raise awareness about the California lifestyle and romanticized "the mission and rancho era of California history.. Tall 8vo., pictorial tan cloth, stamped in orange, in the original clear acetate dust jacket; 266 pages. Editied by Grant E. Smith. Illustrated with dozens of historic black & white photographs, a facsimile of a manuscript map, and map-illustrated endpapers.. Very Good (covers nice; contents clean & tight); nice d/j. (Inventory #: 57449)
$175.00 add to cart or Buy Direct from Antic Hay Books
Share this item
Antic Hay Books
Offered by