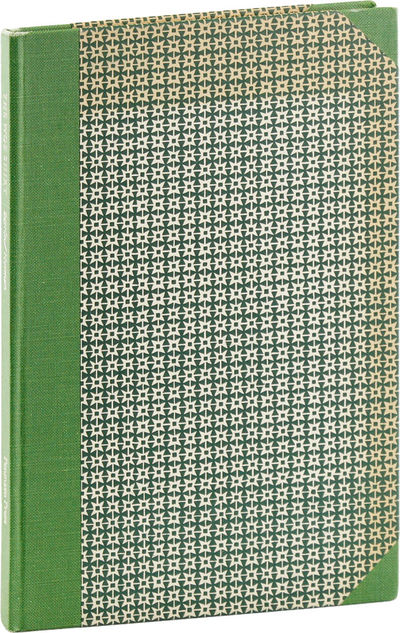 by BARTÓN, Paulé (author); Howard A. Norman (trans.) and Norman Laliberté (illus.)
Lincoln, Massachusetts: Panmaen Press, 1980. First, Limited Edition. First Printing. Signed by the translator and illustrator. Limited to 100 signed copies, this being #54. Ovtavo (24cm); green cloth backstrip over paper-covered decorated boards, titled in gilt on the spine; 62pp. Sunning to the board edges; tiny tear to the upper front pastedown at the joint; Very Good+, no dustjacket as issued.

Collection of 13 folk tales from the Haitian author. Bartón was born in Haiti in 1916 and earned a living as a goatherd—though he, like many on the island at the time, aspired to work as a storyteller, peddling tales in the markets of Port-au-Prince. At some point, he was arrested and later exiled by the violent, repressive Duvalier regime, likely for violating Haiti's loosely defined, and thus incredibly restrictive, law against "polluting the minds of tourists with information about Haiti not sanctioned by the government." (Paris Review). (Inventory #: 53872)
$75.00 add to cart or Buy Direct from
Lorne Bair Rare Books
Share this item

Philadelphia : J.B. Lippincott , 1916
(click for more details about The Curved Blades)
View all from this seller>