Travel Diary of a Trip from Bangor, Maine, to Montevideo, Uruguay, via Rio 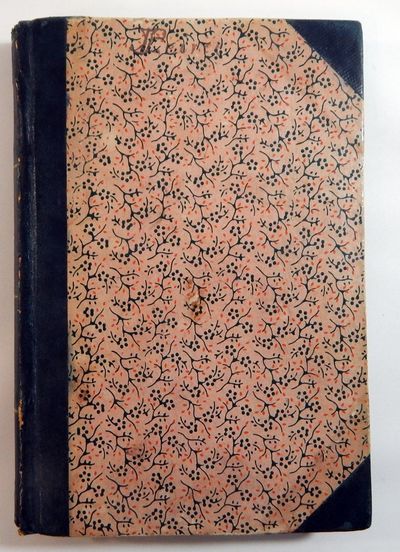 by Peirce, Waldo Treat Hayward
n.p.: n.p., 1854. Hardcover. Very good. 8vo. Bound diary of blue lined paper on which the author has recorded his trips on sixty-four pages. The first page of the diary lists the ships: the Ship Arvum and the Ship R. B. Forbes.

Peirce owned timberland in northern Maine, and did business as a shipping and commission merchant in Bangor. He and his brother, Hayward, owned the firm of W. T, and H. Peirce.

Laid into the diary is a receipt for 11,995 pieces of one inch plank to be carried on the trip.

The diary begins on September 9, 1854, at Frankfort. The ship was not ready. Apparently the ship did not sail until Sept. 12, as the following day Peirce was seasick.

Later he noted flying fish, a whaler, took a salt water bath, took a turn at the wheel, read Gil Blas. On October 24, he made St. Antonio, Cape Verde, and then tried for SE trade winds. In November an English Man-o'War questioned Captain Rankin and nearly boarded the Arvum. Later the SE trade winds were found and he crossed the equator. Lost the North Star but saw the Magellan Cloud instead.

At this point the first part of the diary ends. A number of blank pages follow, as well as two stubs where pages had been excised, a part of one of which is laid in.

The diary resumes on December 4 with a mention of Rio de la Plata. On December 14 at Monte Video he saw thousands of dead locusts floating by,live ones overunning the ship. He had to take refuge in the long boat.

by Whistler, James A. McNeill

London : Printed by Spottiswoode , 1888
(click for more details about Mr. Whistler's "Ten O'Clock")
View all from this seller>