He Held Out the Little Shell in the Beam of Colored Light": from My Days with the Fairies. 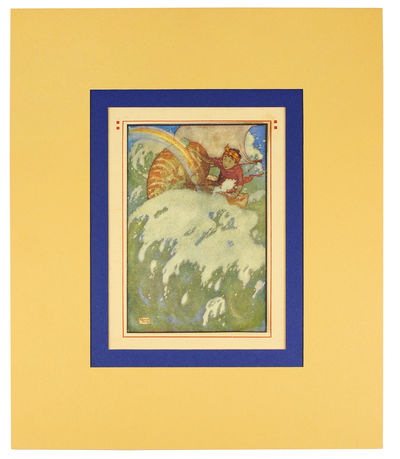 by Dulac, Edmund.
Single offset color print. London: Hodder and Stoughton, 1913. Single offset color print, 4 x 6 inches, tipped to original page with printed border, tipping glue beginning to fail and discolor, else fine. § A single illustration by Edmund Dulac from My Days with the Fairies (1913). Dulac was born in Toulouse, France in 1882, and is one of the three major artists of the Golden Age of 20th century book illustration (along with Arthur Rackham and Kay Nielsen). Having studied both law (at the University of Toulouse) and art (at the Ecole dex Beaux Arts) at the turn of the century, he chose the life of an artist after winning the Ecole's "Grand Prix" in 1901, and again in 1903. From France, Dulac moved to London in 1904, just as the color separation printing process arrived in England. This printing innovation made it possible to mass produce high quality color images for the first time. The process required the use of special coated printing paper, so the color illustrations were not bound directly into the book, but rather tipped in. This resulted in the creation of deluxe edition books containing stunning color plate illustrations of extraordinary beauty and artistic expression. (Inventory #: 123991)
$125.00 add to cart or Buy Direct from
John Windle, Bookseller
Share this item