Improvements Practicable in American Colleges. A paper read before the American Association for the Advancement of Education, at its fifth annual session, in the chapel of the University of New York, on the 30th of August, 1855 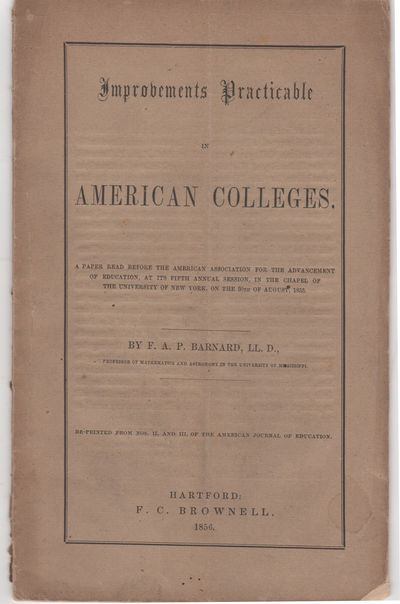 by Barnard, F.A.P. (Frederick Augustus Porter)
Hartford: F.C. Brownell, 1856. Offprint. Stitched paper wrappers. About very good with detached, browned wrappers, mail fold.. 30 pp. 8vo. "Re-printed from nos. II. and III. of the American Journal of Education." As contemporary today as it was then, this piece analyses the issue of practical vs. classical or liberal education. Though nodding to the need for practical concerns, Barnard is of the opinion that college is to 'train minds to think' as can be seen in his six principles: 1. Education, in its widest sense, signifies the development, discipline, and cultivation of all the powers and faculties of man, physical, mental, and moral. 2. Intellectual training, which is that which for the moment concerns us, implies the exercise of the mental powers, in a natural order, and in just proportion, upon subjects of thought. 3. The subjects which furnish the most beneficial discipline are not necessarily, nor even usually, those which are most immediately related to the ordinary pursuits of men in life. 4. Though, in the process of education, we necessarily impart knowledge, yet the best education by no means implies the largest amount of that knowledge which the world calls practical. 5. In arranging a plan of studies, designed to furnish a complete system of intellectual discipline, the question, How far the subjects selected may have an immediately practical value, is one of secondary importance. But 6. Other things being equal that is to say, when the choice is between subjects of similar disciplinary character that which affords the largest amount of useful knowledge is of course to be preferred. Frederick Augustus Porter Barnard (1809-1889), professor of Mathematics and Astronomy in the University of Mississippi later became President of Columbia College in New York, where he argued, though unsuccessfully, for the admission of women to Columbia. Barnard College was named after him. Sabin 3459n. (Inventory #: 38785)
$50.00 add to cart or Buy Direct from
Kaaterskill Books
Share this item