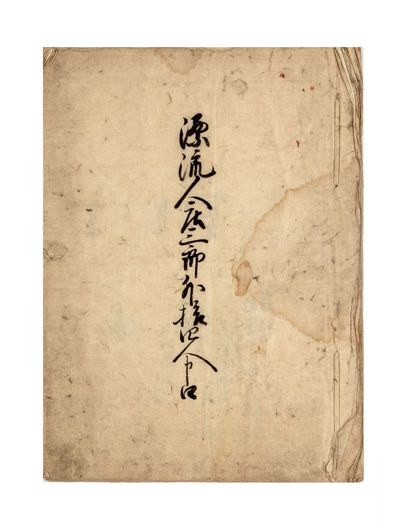 by JAPAN & THE PHILIPPINES
42 folding leaves. 8vo (234 x 170 mm.), orig. wrappers (upper wrapper a little dampstained), orig. stitching. [Japan: from third to last page]: "19 April 1860." An engrossing manuscript account of the Japanese ship Koshiomaru and its crew, which, due to a violent storm, drifted far off course and ran aground on Catanduanes, a Philippine island. The crew was rescued and aided by an indigenous tribe. To our knowledge, this fascinating episode is unknown to Western scholarship. Due to Japan's former strict isolationism, the experiences of the survivors of this incident as well as other examples of Japanese shipwrecked abroad are particularly poignant. With its crew of 14 sailors, and captained by a "Tokusaburo" from Harima Ako fiefdom in Hyogo, Koshiomaru normally transported salt from central Japan to the capital, Edo. After depositing its latest shipment at Edo, it was re-routed to collect surplus rice to bring back to Hyogo. During its return trip, a storm destroyed the vessel's rudder, causing the Koshiomaru to drift, at the mercy of the wind and currents, all the way to the Philippines. Native islanders nursed the crew back to health, and the Japanese stayed for ten months, until 1858, when a British ship, the transliteration of which we are unable to decipher, rescued all 15 crew members and returned them to Japan. Our report, based on Tokusaburo's retelling, is filled with details on the shipmates' travels within the Philippines: their rescue by the local tribe on Catanduanes, and a trip to Manila, where they encountered colonial Spanish officials, and then Amoy (modernday Xiamen in China). This report provides fascinating notes on the local diet (e.g., beef, sweet potatoes, grapes, etc.), landscapes, clothing, architecture, etc. All crew members are named, with their ages. previous addresses, and positions on the Koshiomaru. From internal evidence, we know that this copy of the original manuscript report was created for a Japanese dignitary. In near fine condition; dampstaining to the upper wrapper and the gutter of the first third of the volume. In searching WorldCat, the earliest printed book we can find regarding the Koshiomaru shipwreck is Koenmaru firipin hyoryuki (1983), published in Japan. (Inventory #: 7656)
$4,500.00 add to cart or Buy Direct from
Jonathan A. Hill, Bookseller
Share this item
Jonathan A. Hill, Bookseller, Inc.
Offered by